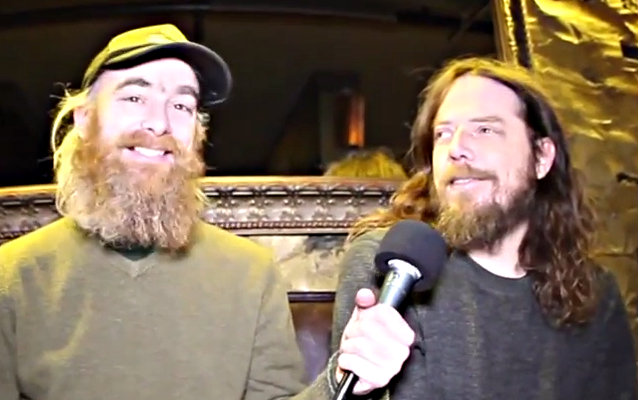 On December 11, Horns Up Rocks! conducted an interview with Bryan Giles (guitar, vocals) and David Sullivan (guitar) of Portland, Oregon's RED FANG in New York City. You can now watch the chat below.

RED FANG has released the video for "Blood Like Cream", directed by Whitey McConnaughy. Actor/comedian Fred Armisen ("Portlandia", "Saturday Night Live") joins in the fun with the beer-loving Portland-based band. "Blood Like Cream" is the first single off RED FANG's new album, "Whales And Leeches".

RED FANG will make its national, late-night television debut on "The Late Show with David Letterman" on Friday, January 10 (11:35/10:35 p.m. CT) and perform "Blood Like Cream".

RED FANG is generating critical acclaim from SPIN, Revolver, Magnet, Alternative Press and more for the new album, which was produced by Chris Funk (DECEMBERISTS) and mixed by Vance Powell (THE WHITE STRIPES, RACONTEURS, KINGS OF LEON). Featuring such guests as Mike Scheidt (YOB) and Pall Jenkins (THE BLACK HEART PROCESSION),"Whales And Leeches" propels RED FANG into the upper stratosphere of the heavy rock and metal elite.