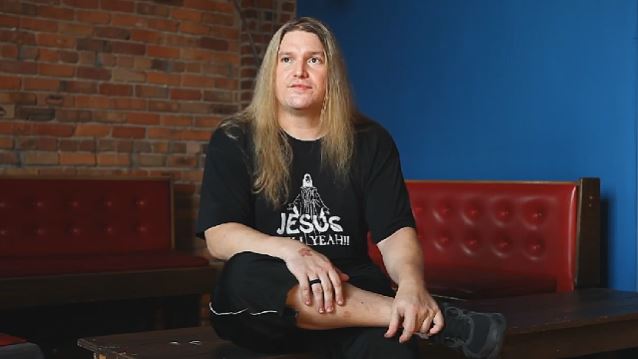 REED MULLIN: CORROSION OF CONFORMITY To Reunite With PEPPER KEENAN In 2015

CORROSION OF CONFORMITY drummer Reed Mullin has confirmed that the band will reunite with its onetime guitarist and vocalist Pepper Keenan in 2015 to record a new studio album and embark on a tour.

In a brand new interview with Heavy Blog Is Heavy, Mullin said about the possibility of collaborating with Keenan again: "Yeah, we're getting together next year. We're going to do an album and do some touring."

He continued: "We've done this three-piece enough to where we want to do something different. That's going to happen probably somewhere close to the beginning of the year. He has that band DOWN that does okay."

Back in May, Keenan told the Lubbock, Texas radio station 94.5 FMX about a possible reunion with CORROSION OF CONFORMITY: "The C.O.C. thing is still a pretty big part of my life and a big part of where I came from and how I got here. So the questions always come up all the time [about whether I will do something with C.O.C. again]. We are getting closer to solving that. Everybody is talking. We've had offers from a lot of different promoters all over the place. It's just a matter of [finding the] time [to do it right], you know, and not doing it half-assed. It has to be real. I'm not gonna jump into it for a paycheck. We all talk and we wanna get together and start writing and see what happens."

CORROSION OF CONFORMITY's most recent studio album with Keenan, "In the Arms of God", came out in 2005 on Sanctuary Records.

C.O.C.'s reunited "Animosity" lineup released its new album, "IX", on July 1 via Candlelight Records. The CD was produced by the band and longtime comrade John Custer.

Fan-filmed video footage of DOWN performing the CORROSION OF CONFORMITY classic "Albatross" on May 9 at the Starland Ballroom in Sayreville, New Jersey can be seen below.