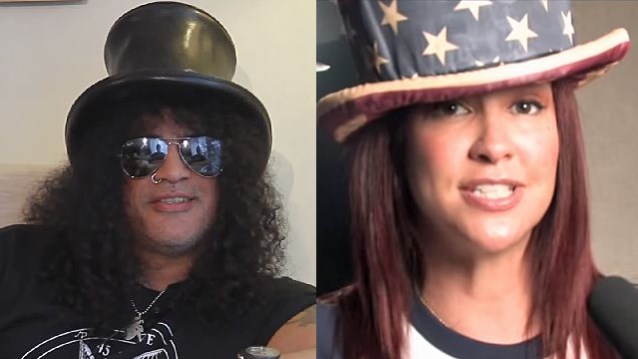 Report: SLASH And Wife Did Not Sign Prenuptial Agreement

According to TMZ.com, Slash and his longtime wife, Perla Hudson, who are splitting up after 13 years of marriage, did not sign a prenuptial agreement when they tied the knot in 2001.

Sources close to Perla tell the site she has already hired a lawyer to figure out exactly how much money Slash has earned since their 2001 marriage. She believes the rocker has made tens of millions of dollars since they married, and she's entitled to 50 percent.

The former GUNS N' ROSES guitarist filed for divorce late last month, citing "irreconcilable differences" and is asking for joint custody of their two sons: 12-year-old London and 10-year-old Cash. He lists June 15, 2014 as the date of their separation.

This isn't he first time things have been rocky between the couple. In 2010, Slash (whose real name is Saul Hudson) filed for divorce from Perla, but decided to give their marriage another shot two months later. The following year they renewed their wedding vows.

Slash, meanwhile, is busy in his professional life. He will receive the Les Paul Award during the 30th annual NAMM Technical Excellence & Creativity Awards on Saturday, January 24 in Anaheim, California. Previous recipients include Todd Rundgren, Peter Gabriel and Neil Young.

SLASH FEATURING MYLES KENNEDY AND THE CONSPIRATORS will be on the road from February through June.