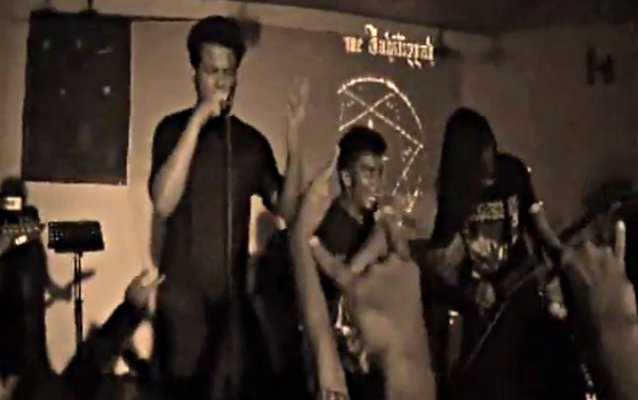 According to The Telegraph, the man who was arrested in Bangladesh for being a suspected volunteer for the self-proclaimed Islamic State was was a singer with the death metal band JAHILIYYAH, named after the period of history in Arabia before the rise of Islam.

Asif Adnan, 26, was arrested in Bangladesh after he and another man, Fazle Elahi Tanzil, were recruited by Samiun Rahman, a 24-year-old London minicab controller, to travel to Syria to join ISIL militants. All three face life sentences if convicted.

Adnan's family has submitted a bail application which describes him as having "brilliant academic and cultural records", holding a first-class degree in economics. His family accuses "cultural rivals" for instigating his arrest "on the basis of baseless information and implicated him in a groundless case with a view to destroy his career, future and to harass him and his family."

Detectives claim to have intercepted text messages by Adnan to Tanzil in which Adnan spoke of his desire to travel to Syria and join the "jihad."

"I just want to be in the land of Jihad. Among the Mujahideen. Living a life only for Allah," he is alleged to have written. He was also trying to figure out where to travel to depending on which jihadi group accepted him: "It if is from Nusra, then probably to Khorasan," he allegedly wrote. "If it is AQIS [Al Qaeda in the Indian Subcontinent] then the focus is on Burma, don't know the details about that."

Adnan, who formed JAHILIYYAH in 2010, told Roads & Kingdoms earlier this year that his music and his faith are compatible. "I'm a Muslim and I follow the rules of my religion," he said. "But that doesn't stop me from living with a passion for metal, and keep an open mind. Don't you think that metal is universal by now?"

He added: "The fact that I'm a Muslim doesn’t affect the quality of my music. Think of the Indians, for example: do you believe that their metal is less interesting because they are Hindus? And what about you Europeans? Christianity doesn't make your music better or worse. Metal is a global language, and we Bengalis are proud to add our style to the genre's plate."

Adnan also lamented the fact that foreign bands generally skip Dhaka, the capital of Bangladesh when they visit South Asia, preferring the larger audiences in Indian metropolises such as Delhi and Bangalore. "In India, metalheads are more fortunate — they saw METALLICA, LAMB OF GOD, INCANTATION," Adnan said. "Nobody comes up here. Even in Nepal the scene is better than ours. NAPALM DEATH played recently in Kathmandu. And forget about going abroad. It almost seems like being a Bengali was a deadly sin."