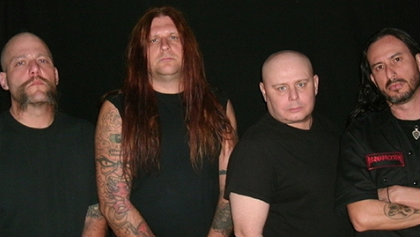 Long-running Floridian death metal outfit RESURRECTION has parted ways with bassist/vocalist Damien Chavez. The has recruited Jeff Surmell of SOLACE OF REQUIEM to fill in for its upcoming "March Of Death" European tour, which kicks off on March 14 in Germany and takes the band through Germany, Belgium, Holland, Czech Republic and Poland.

Comments RESURRECTION: "Many reasons went into the decision to part ways [with Chavez], but all that needs to be said is that Damien is on a different level, musically as well as personally, than the rest of the band. Our priorities just no longer aligned.

"Without going into excessive and unnecessary detail, and as hard as it is this close to the European tour, the band had to make the tough decision to cut our losses and move on.

"Jeff Sumrell, frontman for the technical death metal band SOLACE OF REQUIEM, will be handling the vocal and bass duties during the upcoming 'March Of Death' European tour.

"Jeff toured with [RESURRECTION] in 2010 during the 'Resurrected In Europe' tour and kicked ass every night of the tour.

"Jeff's vocal style and power dramatically add to the brutality of our live performance and we're excited about what the future might hold with Jeff and RESURRECTION.

"We would like to thank our fans for the continued support."

RESURRECTION recently inked a deal with Old School Metal Records for the release of its first full-length album since 2008's "Mistaken for Dead". The effort will arrive in March to coincide with the "March Of Death" tour.

"Mistaken For Dead" was released in North America in October 2008 via Locomotive Records. The CD was issued in Europe in July 2008 through Massacre Records.