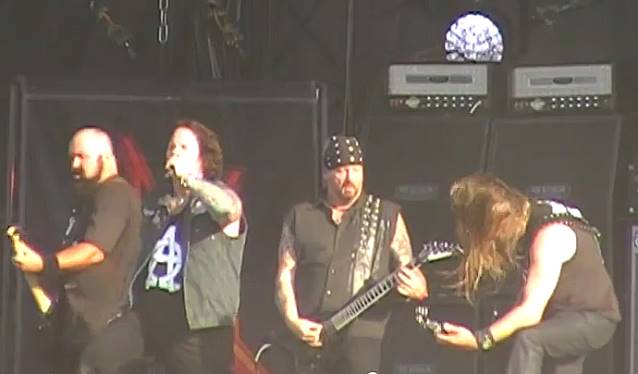 Fan-filmed video footage of reunited thrash metal pioneers DARK ANGEL performing on June 22 at this year's edition of the Hellfest in Clisson, France can be seen below.

Commented DARK ANGEL drummer Gene Hoglan: "Boy, these DARK ANGEL shows have truly been incredible! To be playing again and hanging with the guys has been just awesome, as well as meeting all the fans! So many of you have so many great stories to share, it's been a real pleasure for all of us.

"Y'know, DARK ANGEL has always been a strong brotherhood, and getting together again with the dudes has just increased it. And hey, even my Dad got to come to the Sweden Rock show with us! That's fun! He got to see the brutality of the traveling metal musician real up close and personal, but Dad's a total trooper, and he had a blast!"

During an appearance on the September 8, 2013 edition of the "Heavy Metal Mayhem" radio show, Hoglan spoke about the DARK ANGEL reunion, saying: "The most important thing for, I think, any of us, and especially me, and I know a couple of the other guys that are involved that the legacy of the band is very important. And if the band has attained some of kind of underground legendary status over the years, then if we do wanna return, a lot of people have great expecations of us, we'd better exceed those expectations.

"Like Ron Rinehart said, the definition of 'good' is 'not bad.' [laughs] We don't wanna come out and even be great; we wanna be No. 1. And that's a very heartening attitude.

DARK ANGEL released two albums with Don Doty on vocals — 1984's "We Have Arrived" and 1986's "Darkness Descends" — before he exited the group and was replaced by Ron Rinehart (after a brief stint with Jim Drabos in 1987). The band issued two more studio LPs — 1989's "Leave Scars" and 1991's "Time Does Not Heal" — before calling it quits in 1992. Rinehart, Hoglan and Meyer reassembled DARK ANGEL more than a decade ago but were forced to abandon their reunion plans after health issues reportedly put an end to Rinehart's singing career.