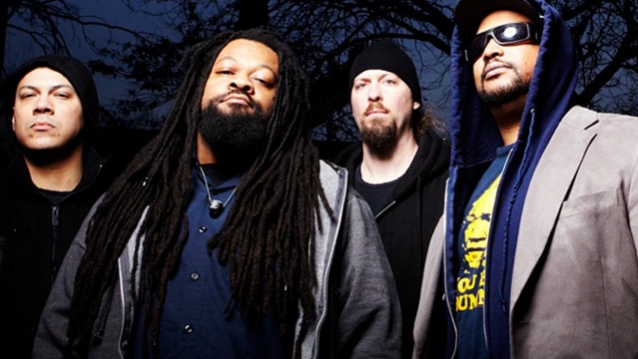 GOD FORBID guitarist/vocalist Doc Coyle commented: "I wasn't sure that this would ever happen, but I can't tell you how psyched I am to announce that GOD FORBID is reuniting to play this year's Blue Ridge Rock Festival. These are my brothers, and I can't wait to share this with the fans who've been waiting."

Last December, Doc told "The Jasta Show" about the possibility of a GOD FORBID comeback: "I think [the reunion] will happen; it's just a matter of when. Because Byron [Davis, vocals], he has a family, he's married, he's got a house, he's kind of doing that thing, everyone's kind of spread out. Same thing with John [Outcalt], our bass player; [he's] got a kid, got a house, got a mortgage, wife and you know… everyone’s kind of moved to this different phase of their lives and it makes it really have to create space to do these things and it's such a commitment of time and effort. And I'm super respectful of that, and I just don't wanna force anything, or make [the reunion] about money, or make it about… too much business. I want it to be about our friendship and kind of doing something for the fans. 'Cause we never did a last show, we never did a last tour, we never did a farewell. And so I think that that left just an empty kind of space there. And it's unfortunate, because I'm of the mind that I always wanted to do things the right way."

GOD FORBID's latest album, "Equilibrium", was released on March 27, 2012 via Victory Records. The bulk of the CD was recorded by Mark Lewis (THE BLACK DAHLIA MURDER, WHITECHAPEL, DEVILDRIVER, TRIVIUM),with Jason Suecof (TRIVIUM, ALL THAT REMAINS, THE BLACK DAHLIA MURDER, CHIMAIRA, DEVILDRIVER) stepping in during the the vocal-tracking stage. The effort was mixed by acclaimed Swedish producer Jens Bogren, who has previously worked with such acts as KATATONIA, OPETH, PARADISE LOST and AMON AMARTH.

GOD FORBID is Reuniting for Blue Ridge Rock Festival 2022! Performing LIVE for the first time since their 2013 breakup, they toured Ozzfest, MTV's Headbangers Ball, and have become one of the most in-demand Reunions in Heavy Metal recently. pic.twitter.com/qcnYaUx0pB