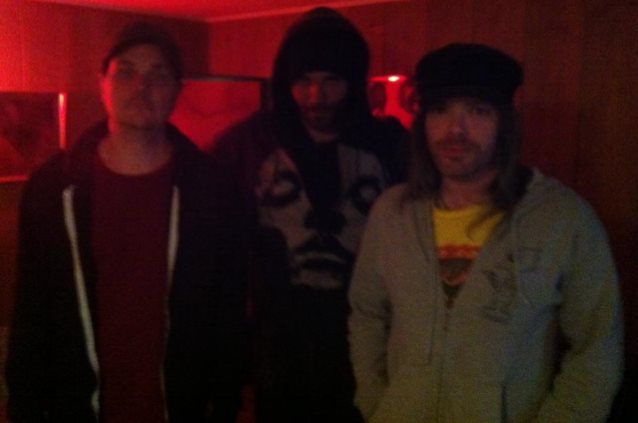 Original ENTOMBED members Alex Hellid (guitar),Ulf "Uffe" Cederlund (guitar) and Nicke Andersson (drums) will rejoin forces for an appearance on the Close-Up Båten cruise, which will leave the Stockholm, Sweden port on October 27 for Åbo, Finland, and return the following day. The group will also perform its 1991 sophomore landmark album, "Clandestine", with the Malmö Symphony Orchestra in Malmö, Sweden on November 12.

The ENTOMBED band that will perform on the Close-Up Båten cruise and in Malmö is not to be confused with ENTOMBED A.D., which features ENTOMBED vocalist Lars Göran Petrov alongside Olle Dahlstedt (drums),Nico Elgstrand (guitar) and Victor Brandt (bass).

Asked how his reunion with Alex and Nicke came about, Uffe told Decibel magazine: "Alex and I got together [in 2014] when he needed my help with the orchestration of 'Clandestine' [for the Gävle Symphonic Orchestra collaborative performance]...and we realized that we still really liked each other! We talked about how great it would be if Nicke joined us. So Alex asked to see if he was interested and he was. Nicke could not be present at that show, but he was into doing something together again. I guess the extra spur was we could not agree with L.G. Petrov on the legal issues over the name ENTOMBED — which Nicke came up with. I felt more comfortable once Nicke got involved because he formed ENTOMBED and wrote the best and most songs when he was in the band. None of this would exist if Nicke was not on the ENTOMBED ship...If Nicke had called me and said not to continue on without him, I would have respected that. He was always in my heart, somehow, and I am thankful for him letting us continue. He's the man and a genius! Alex pulls the strings to make cool things happen. I just ride along. We have fun when we hang out, we can be real honest on everything and I think it'll be great to play with these guys again."

Regarding who will be singing and playing bass for ENTOMBED on the Close-Up Båten cruise and in Malmö, Uffe said: "I'm sorry to not be able to let you know, 'cause I don't know! We're actually in the process of figuring that out right now. It's sort of difficult 'cause we really want this to work out the best way possible."

Uffe also talked about ENTOMBED's plans beyond the shows that have already been announced. He said: "We're not going to do big world tours. Right now we have these two shows booked and we're taking it from there. It must be fun and everyone must be into doing it." As for the possibility of new ENTOMBED music, Uffe said: "I hope so. We have been re-recording old stuff to see how we sound today — and we like it. Time is flying faster as I get older and I would love to be part of a new ENTOMBED album. First, though, we must focus on the shows. I would be satisfied if that's the only thing we end up doing, but I'm open for more."

Hellid and Petrov have been embroiled in a legal battle over the ENTOMBED name for several years. In 2014, Petrov was awarded the right to use the band name in connection with future recording and touring activities, a decision which Hellid appealed without success. The guitarist then went on to register a trademark for beverage production under the "Entombed" name. This move did not sit well with Hellid's former bandmate, who filed a letter of protest against Alex's registration of the name, claiming that it could be confused with band activities. He also said that Hellid acted in "bad faith" when he registered name and that there was a desire to "deceive the public." Petrov's protest, however, found no favor with the Swedish Patent And Registration Office, which rejected his claims on the issue in a March 8 ruling.