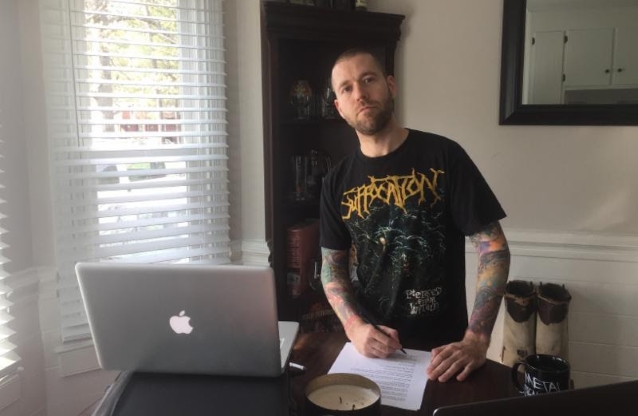 REVOCATION, which has been part of the Metal Blade Records roster since 2014, has re-signed with the label. Vocalist/guitarist Dave Davidson comments: "We've been on quite a journey since we signed with Metal Blade and dropped 'Deathless' back in 2014. We've released three full-length albums in just five years and each one has taken us to the next level. That's why today I'm very excited to announce that REVOCATION is re-signing with Metal Blade Records. We look forward to what this future partnership will bring and we can't wait to unleash another barrage of ripping tunes upon the metal masses."

Metal Blade founder and CEO Brian Slagel adds: "We are super excited to continue our great relationship with REVOCATION. Very happy to keep them in the Metal Blade family."

REVOCATION released its latest album, "The Outer Ones", last year to critical acclaim. The is now touring the USA with WHITECHAPEL, DYING FETUS, FALLUJAH, SPITE, UNCURED and BURIED ABOVE GROUND.

Produced by Chris "Zeuss" Harris (ROB ZOMBIE, QUEENSRŸCHE, WHITECHAPEL),"The Outer Ones" saw REVOCATION pushing both the death metal and progressive elements of its signature sound harder than ever.

"I knew that I wanted to go in a darker direction, and this is our most death metal album to date," Davidson said. "Sometimes when death metal bands go down the prog route, they lose some of that edge, but we wanted to keep the aggression at the forefront of what we do while still pushing our boundaries."