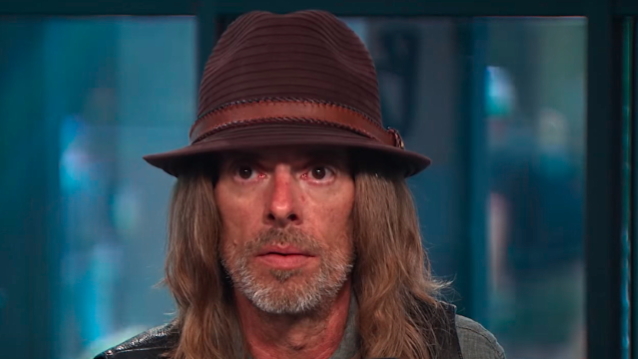 PANTERA's early pre-fame output will never be properly reissued, according to Rex Brown. Calling their four-album glam rock catalog "[like] looking at your old high school notebooks", the bassist made the revelation to Eonmusic while talking about the just-released "Reinventing The Steel" 20th-anniversary edition.

Breaking internationally with major-label debut "Cowboys From Hell" in 1990, the Texan act released three albums — "Metal Magic" (1983),"Projects In The Jungle" (1984) and "I Am The Night" (1985) with original vocalist Terrence Lee "Terry" Glaze, as well as 1988's "Power Metal", which introduced frontman Philip Anselmo, on their own Metal Magic Records imprint, in limited quantities. The original releases have since become highly desired collectors' items.

Although a far cry from what was to come, PANTERA's '80s releases made a huge splash in their native state, and showed off the prodigious skills of guitarist "Dimebag" Darrell Abbott — then known as Diamond Darrell — in particular, on gems such as "All Over Tonight" and "Hot And Heavy".

Talking about those formative years, Rex said: "This is like going back and looking at your old high school notebooks and going, "Look at how far you've come in between."

Pointing to band's early work ethic, he admitted that although they worked hard, he did not expect that the albums would still be being talked about today.

"I will say this: a lot of bands didn't have the opportunity at 17 years old to fuckin' put a record out," he noted. "We just happened to do it, and we paid for every fuckin' lick of it; none of it was given to us. We paid for the studio time, we paid for the pressing of the record, and we never thought that that would go anywhere, nationally, globally, so it's almost like, after the fact. But we really learned how to write a song, and be a band."

Dismissing the first three albums, Brown said it was with the addition of Anselmo that the PANTERA story really began.

"The old singer? Shit, it was going nowhere really quick," Rex said. "He just was not on the same wavelength as the three of us. The dude's never had a job in his life. I see him shootin' his mouth off in some of these magazines, and it's, like, 'Dude, you were in the band for fuckin' four years,' you know what I'm saying? 'Now you're wanting claim to fame 35 years later? Sorry, pal, you missed the boat!' So I don't want to give any credit where it's fuckin' undue, you know? Once we got Philip in the band, it developed into something else, and that was the PANTERA that we know now, and that's why we never talk about those old records."

Looking back, Brown conceded: "Hey, look, it's great to go back memory lane and all that kind of stuff, but those are the farthest things that I wake up for in the first of the morning. 'Oh, remember that one tune 'Nothing On (But The Radio)', and the singer?' No! I mean, I hate fucking songs like that, but it was a growing process, and now, because the things are out, and they've been bootleged a hundred thousand times, people consider it a part of our history. It's not. Unless Philip's singing on it, it's not PANTERA. That's the way I look at it."

When asked outright to clarify that he had absolutely no desire to ever see those records reissued, officially, Rex was emphatic; "God no, god no! The brothers were against that, and I'm against it, and that's just it. Period. It ain't coming out."

Last fall, Glaze said that he hoped PANTERA's early albums could receive a proper release one day. He told the "Drag The Waters: The Pantera Podcast": "It would be amazing to share that music with the rest of the world. I think everybody would really be interested in listening — especially listening to Darrell's guitar playing. With with the loss of Darrell and Vince [Paul Abbott, drums], I guess it would come down to their father [Jerry Abbott] and Rex. I don't have possession of the master tapes, and with Vince gone… It'd be a great thing for the fans — I'd love to be part of that — but as of right now, I haven't spoken to Jerry Abbott or Rex about it."

Glaze went on to suggest a possible new PANTERA box set featuring the three albums he performed on plus 1988's "Power Metal", which marked the recording debut of his replacement, Philip Anselmo. "Put all four together in a box," he said. "The rhythm section and the guitars — bass, drums and the guitars — are consistent through the whole project. And you could see the growth through them. It'd be really cool. I would love to help out in that in any way I could. But we'll see. Hopefully someday."

During the same chat, Glaze was asked if he left PANTERA on good terms or if he was done dealing with the Abbott brothers. He responded: "A lot of times, when you hear those things, where they'll say 'musical differences,' I don't remember any musical differences. The two hours of the day that we were on stage was the best — but you hear that from a lot of touring bands. It was the other 22 hours of the day that was tough to get on. Ultimately, there were four guys in the band, plus their father was the manager, and three of the five had the same last name. And they never split their vote, so you didn't really have any say. And so that ultimately started to wear, and ultimately, I just chose to go in a different direction. But I loved the music and I loved playing all of them, especially Darrell."

Back in February 2018, Glaze said that the last time he saw Vinnie was when he attended Darrell's funeral in December 2004, just days after the PANTERA guitarist was killed while performing with DAMAGEPLAN at the Alrosa Villa in Columbus, Ohio, Dimebag was shot onstage by Nathan Gale. He was 38 years old.

In April 2010, Glaze joined Brown on stage at the debut gig from Rex's then-project ARMS OF THE SUN in Dallas, Texas (see video below). They performed a couple of early PANTERA songs — "Come-On Eyes" from 1985's "I Am The Night" and "All Over Tonite" from "Projects In The Jungle".