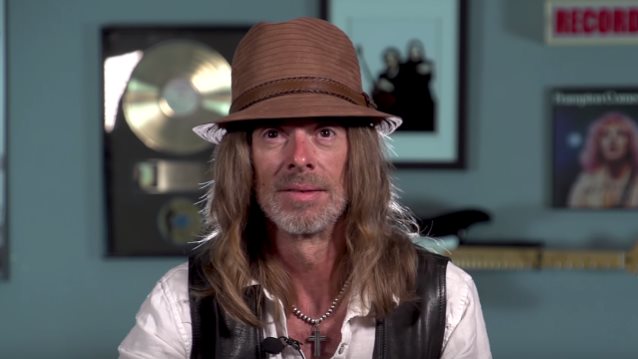 Former PANTERA bassist Rex Brown stopped by the Guitar World studios to talk about some cool PANTERA stuff that not a lot of fans know, plus to discuss his relationship with "Dimebag" Darrell Abbott.

Speaking about the late PANTERA guitarist, Brown said (see video below): "I knew Dime before he even knew how to play a bar chord. His dad kind of taught him… His dad was left-handed. So I think once that… We all know the story and history — once Randy Rhoads came around, it was all over. Dime went from just being a kid that played bar chords to this protégé overnight. And it was the most unreal thing I've ever seen in my life — for some kid, all of a sudden, just to do that. Not seeing him for a summer — two or three months — and then [see him] come out this completely different dude. It was amazing. It was really, really cool, man. And I miss him dearly."

Brown has been publicly critical of the way his 2013 autobiography, "Official Truth, 101 Proof: The Inside Story Of Pantera", turned out, saying in recent interviews that the book's publication is partly to blame for the deterioration of his relationship with another former PANTERA member, drummer Vinnie Paul Abbott.

"There was a bunch of shit in my book that was not supposed to be in that book, and I went through ten different edits and they put it in there anyway, and it left a fucking bit of sour in some people's mouths," Rex told the "Trunk Nation" radio show last month.

Brown's "Official Truth, 101 Proof" co-writer, Scottish author Mark Eglinton, later disputed Brown's claims, tweeting: "Just to be totally clear and fair: there's nothing in the book that shouldn't have been. It was all signed off. I was there."