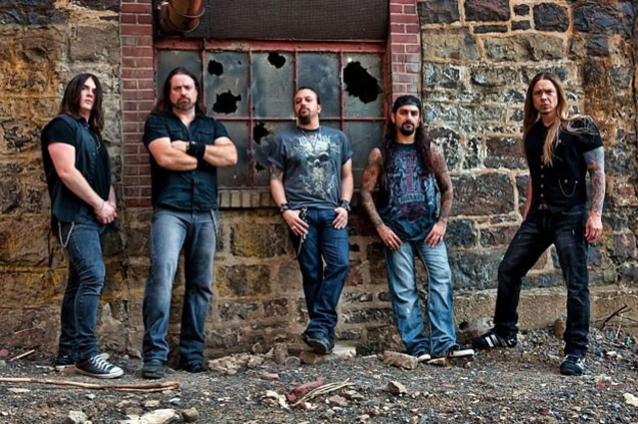 RICH WARD Looks Back On His Time With ADRENALINE MOB: 'Two Members Of The Band Got In A Fistfight On The Third Show'

Rich Ward says that he would have stayed in ADRENALINE MOB if he felt that the band had the potential to become successful.

The guitarist, who made a name for himself with STUCK MOJO and FOZZY, announced his departure from ADRENALINE MOB in early 2012 due to what he said at the time was "scheduling conflicts" with his other projects. Bassist Paul DiLeo (FOZZY) also left at the same time and was replaced by DISTURBED's John Moyer. Drummer Mike Portnoy (DREAM THEATER, AVENGED SEVENFOLD),SYMPHONY X frontman Russell Allen and guitar virtuoso Mike Orlando (SONIC STOMP) went on to release one full-length album, "Omertà", in 2012 prior to Portnoy's exit from the group. Allen and Orlando issued two more LPs, 2014's "Men Of Honor" and 2017's "We The People", before a tragic road accident in Florida put an end to ADRENALINE MOB's touring and recording activities.

Ward spoke about his time with ADRENALINE MOB during a recent interview with MetalAsylum.net. He said (hear audio below): "I really loved that band. If I felt like it was going to last, I would have stayed. I was the first guy out. And the reason I was is because everybody in the band had this feeling that this was the style of music that they should play and that they wanted to play. But I was trying to respectfully say, 'This is not the style of music that you guys really do.'"

He continued: "Russell Allen, to me, is if not the best, one of the greatest voices of our generation. Jeff Scott Soto, Jorn [Lande], Russell Allen — there's a few guys. Anything they sing makes me weepy. And, to me, Russell is at his best when he's singing late-'70s KANSAS style — just that beautiful, bluesy, got grit in his voice. He can tell a story, and I believe every word he sings. He's magic. His voice is beautiful, and yet it has quality, it has a hauntingness to it. It's powerful. He can sing [Ronnie James] Dio — he does all these things. And in ADRENALINE MOB, he's doing stuff that could have easily been on a BLACK LABEL SOCIETY record or a DISTURBED album or something — it's kind of a more grunty, barky thing. I was, like, 'Why? Dude, you realize you have one of the most amazing voices of all time, a style that is so unique. That's how you should sing.' But how do you tell Russell Allen in his band — I'm the last guy in. They already are an established group of guys — four dudes — and they're looking for a rhythm guitar player. How do you tell them and how do you say to Portnoy, who's arguably one of the most talented drummers of all time, 'Don't play like Tommy Lee. Play like you.'

"I think there was this idea in ADRENALINE MOB that they were going to be this radio band," he said. "And I was much more trying to say, 'We should either look really forward or look way back, go super retro.' I kept kind of saying it respectfully: 'Why don't we look at doing something '70s, or CREAM — something really interesting and heavy, SABBATH-y, but melodic.' There's so much stuff. Instead of kind of doing this 2010 Octane heavy rock kind of thing that they were doing. Yeah, it was groovy, and they were showing off some musicianship."

According to Ward, part of the problem with ADRENALINE MOB was that there were too many people in the group who wanted to be the leader and felt that their vision was the correct one. "There were so many guys in the band who had so much success on their own — Russell, obviously, with SYMPHONY X; Portnoy in DREAM THEATER; me with STUCK MOJO and FOZZY; Paul DiLeo, the bass player, had so many credits, whether it's Joe Lynn Turner; he played for Ace Frehley, playing for Nena, this huge pop star in Germany. We all have this experience. And the guy who kind of started the whole band is Michael Orlando, and he's the guy who had kind of done not really anything — other than be one of the most amazing guitar players you've ever seen. He really is. I looked at his hands and it's almost like — it's CGI. I couldn't look at it without thinking it was a trick. His hand is so fast — he plays so amazingly quick, and tasty. He's a one-in-a-million guitar player — he really is. So I had a good spot in that band in that I was the Rudolf Schenker, I was the [James] Hetfield. I had a great, perfectly designed spot for me in that band, and if I felt like it was going to be successful, I would have stayed. But I just felt like the guys were attempting to do a style of music that wasn't steering into our sweet spot as a band. And at the same time, [there were] too many chiefs, too many people with a lot of experience who think they know the best. It was never going to work, 'cause there weren't enough betas in that group. There were too many people who thought they knew the right answer.

"Part of me thinks I could have tried to be a little more assertive, but who am I to say what's right and wrong," he said. "Even that's arrogant to say. 'I know what's right for them.' I don't know. I had an opinion, but I don't know if it was the right one.

"I would have loved to have seen ADRENALINE MOB do a hard rock record that was way more akin to something SABBATH meets ZEPPELIN meets KANSAS meets a little bit of proggy musicianship," Ward added. "And I think what Mike's [Portnoy] doing now with SONS OF APOLLO is bang-on. That's where he should be, because he's telling stories that very few drummers can tell, whereas in ADRENALINE MOB, he was telling stories that everyone was telling — playing very similar to a lot of other guys; this kind of groove style, which is very difficult to do well. But there were so many unique individuals in that group, I would have loved to have seen them do something else."

Ward went on to say that personal differences also played a part in his decision to leave ADRENALINE MOB. "Two members of the band got in a fistfight on the third show, and I was, like, 'Okay. So, we're fighting on day three. We can't make it to the second week,'" he recalled. "And Mike wants to do eight covers in the set, and the originals sound like SEVENDUST b-side songs. I just felt, like, 'Man, I don't know if this is gonna last.' And they were mad at me when I left — they were. I got kind of snippy messages from the fellows kind of individually. And then later, when Mike Portnoy left, he sent me a message. He was, like, 'Yeah, you saw it first.' But I still love those guys. And part of me still wishes that I played with them, just for the excitement."

Earlier this year, Orlando said that he didn't know if ADRENALINE MOB will ever do anything again, more than two years after the accident that resulted in the death of the band's bassist, David Zablidowsky.

At the time of the accident, ADRENALINE MOB was touring in support of "We The People", which was issued in June 2017 via Century Media. The disc was the first ADRENALINE MOB release to feature Zablidowsky and drummer Jordan Cannata.

For the record, I was NOT one of those two members... 😂

Sorry for putting that out there without clarification. Ha! Love you Mike.