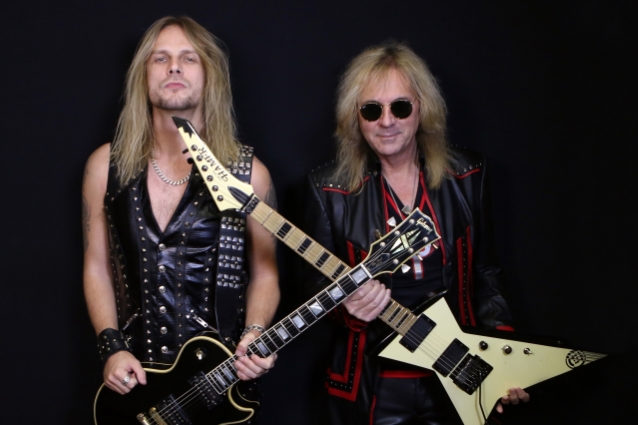 In a new interview with "The Five Count" radio show in Mankato, Minnesota, JUDAS PRIEST guitarist Richie Faulkner spoke about the progress of the songwriting sessions for the follow-up to 2018's "Firepower" album. He said (as transcribed by BLABBERMOUTH.NET): "It's been challenging, obviously, with everyone being split up over the last eighteen months due to the pandemic. We've had some ideas for a long time now, but we were unable to, obviously, get together and put these ideas down in the studio. So we've got a collection of songs relatively there; they'll take a bit of work, a bit of magic dust from the producers, and we've gotta get in there to record 'em, but we've got a ton of stuff that we just wanna get in and record. So we're really excited that hopefully we can all get together soon and get that done. So, yeah, there'll be new PRIEST in the near future, I'm sure."

Asked if PRIEST's Parkinson's disease-afflicted guitarist Glenn Tipton is still involved in the band's songwriting process, Richie said: "Absolutely. When Glenn found out about Parkinson's, we went out on the road for 'Redeemer Of Souls', and then after that, it got a bit too much to be able to do the whole touring cycle, as we're all aware. But he's still got his mind, he's still got his creative ideas, and if he's having a down day where the challenge of the guitar is a bit too much, then he can still direct his ideas and I can play them for him. If he's saying, 'No, we need another note there,' or, 'I'm hearing something in my head,' we can communicate that way. So the key ingredient, and we're lucky to have it, is Glenn's creative mind. As I said, even if he's having a down day, he can still get those ideas across and be involved and scratch that creative itch that he has, which, in turn, creates a better, more fleshed out JUDAS PRIEST album."

Tipton was diagnosed with Parkinson's seven years ago — after being stricken by the condition at least half a decade earlier — but announced in early 2018 he was going to sit out touring activities in support of "Firepower". He was replaced by Sneap, who is also known for his work in NWOBHM revivalists HELL and cult thrash outfit SABBAT.