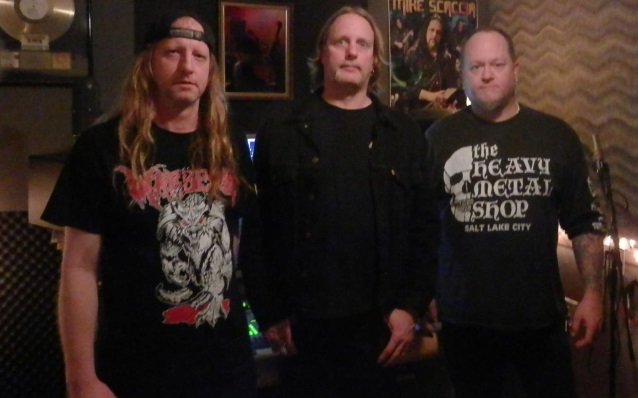 23 years after their last record, and 19 months after the tragic loss of guitarist Mike Scaccia, Dallas, Texas speed/thrash metal veterans RIGOR MORTIS have announced the long-awaited release of their fourth and final studio album, "Slaves To The Grave", Due on October 7 via Rigor Mortis Records, the CD marks the band's first studio release in 23 years, and the first to feature the classic original lineup (Mike Scaccia on guitar, Casey Orr on bass, Bruce Corbitt on vocals, and Harden Harrison on drums),since RIGOR MORTIS' 1988 eponymous debut effort. Recorded less than a year before Mike's passing, "Slaves To The Grave" was to going to herald the band's long-overdue comeback.

In February 2012, RIGOR MORTIS entered MINISTRY's 13th Planet Studios in El Paso, and recorded the 10 tracks that would become "Slaves To The Grave". The artwork was created by Michael Broom and can be seen below.

When no labels were willing to release the record (after all, there would be no touring to support it, or follow-up record),they decided to release it themselves. With no money, they started a fundraising campaign on Indiegogo. They called in favors from their friends to get the record mixed and mastered just right and get the cover art just the way they envisioned it. They decided to add a behind-the-scenes "making-of" DVD to the initial pressing, and to release it on vinyl. They are all very proud of this record and the history that surrounds it. They have endeavored every step of the way to do justice to the RIGOR MORTIS legacy, and bring honor to Mike Scacciaʼs last recorded testament.

The subject matter hasn't strayed much. Twisted tales of horror and woe, monsters and madmen, warfare and plague abound. The tracks are fast and heavy as one would expect, but there is also a maturity and growth that only comes with age and experience. Musically, "Slaves To The Grave" draws from a legacy of brutal influence. The speed and thrash metal that RIGOR MORTIS cut their teeth on is evident throughout the record in the intensity and velocity of tracks like "Flesh For Flies", but also, one could argue, are influences such as Italian horror soundtracks by GOBLIN, as heard on the outro solo of "Poltergeist".

While "Slaves To The Grave" was very much a group effort, and all four came together like a fist to crush all doubt, it has to be said, of course, that the highlight of this record, and indeed RIGOR MORTIS as a whole musically, is Scacciaʼs incredible guitar playing. His freakish speed picking and beautiful sense of melody is mesmerizing. His solos are stupefying. Mike's style was much closer to Paganini, than to, say, Dave Mustaine or "Dimebag" Darrell Abbott. He was unique.

Without question, this record contains some of Mike's finest work. In his zone and with no restraints, he delivered some absolutely stellar performances. His solo at the end of "Blood Bath", for instance, is absolutely breathtaking, exposing more heart and soul than precious few of his contemporaries possess.

"Slaves To The Grave" track listing:

Scaccia, who is best known for his work with MINISTRY, RIGOR MORTIS and the REVOLTING COCKS, died on December 23, 2012 of a sudden heart attack brought on by a heart disease (official cause of death: atherosclerotic and hypertensive heart disease),according to the Tarrant County medical examiner's office. Officials ruled it a natural death. He was 47 years old. 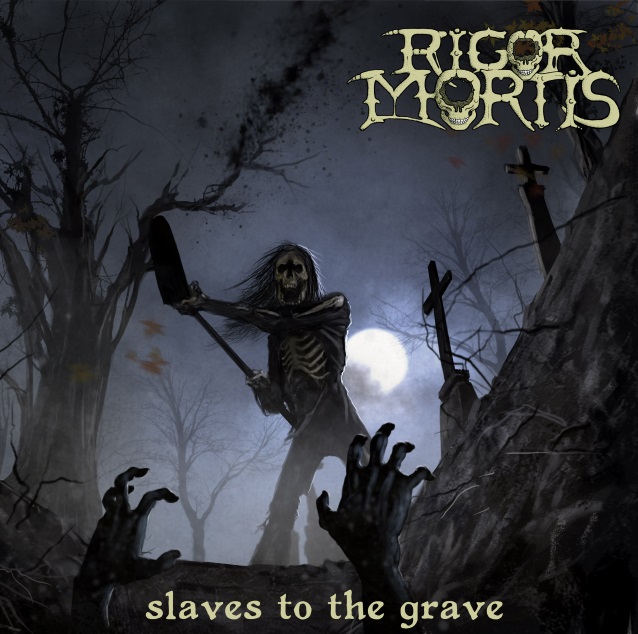