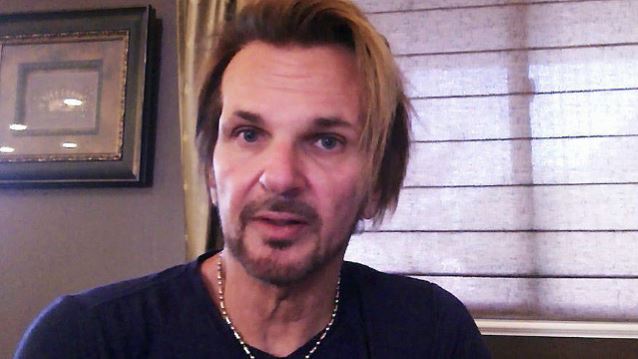 RIKKI ROCKETT: Anybody That Has Had More Than One Sex Partner Is At Risk For Neck And Throat Cancer

POISON drummer Rikki Rockett was interviewed by rock journalist Mitch Lafon for a recent edition of the "One On One With Mitch Lafon" podcast (Facebook page). You can now listen to the chat using the Spreaker widget below.

Speaking about the cause of his 2015 oral cancer diagnosis, Rockett said: "This is from HPV [the human papillomavirus, the most common sexually transmitted infection]; that's where it's from. And I caution anybody that has had more than one sex partner in their life. Okay? I mean, I have a partner, a buddy, and a girl that I went through this treatment with. Both of them… One of them's been married nine years, the other one's been married fifteen years. And it was HPV positive. That's how long HPV lasts in the system. So somebody can be married and live happily and get all these tests and everything is clear, and all of a sudden, you get head and neck cancer and go, 'What the hell happened? 'Are you cheating on me? Or what the hell is…' And it's not. It's a very invisible, very scary STD that is also being passed from hand to mouth now, they're thinking. I mean, it's epidemic."

He continued: "I don't have one single friend that isn't at risk — not one. I mean, everybody I know has had sex with more than one person. Now, it's more detectable in women than men; women can get papsmears and things like that. Men, there's really no test for it at this point; there's no routine screening. So that's another thing that I'd love to see change — a routine screening for it — because if you do have it, there are some vaccinations on the way, treatment vaccinations, that could eradicate it before it ever became cancer."

About a dozen high-risk HPV types have been identified, with two of these, HPV types 16 and 18, responsible for most HPV-caused cancers. "I don't know which one I had; I think it was 16," Rikki said.

Rikki also talked about the importance of convincing parents to immunize their kids against HPV by getting them vaccinated. The HPV vaccine was initially created for preteen girls to prevent cervical cancer when they are older but is now recommended for boys as well. Doctors say parents who worry that the vaccine will give teenagers a license for promiscuity still stand as its greatest obstacle.

Said Rockett: "It's highly controversial because the highly motivated Christian and religious fanatics and anti-vaxxers don't wanna see it. But then the more responsible parents go, 'You know, my daughter could get this in a swimming pool at this point in time,' or some other way. I mean, they can make out with a kid that's got HPV. Don't think I'm not gonna vaccinate [my daughter]; I'm gonna vaccinate her as soon as they give me the clearance to do it."

HPV causes most oropharyngeal (throat) cancers, which are far more common in men and are expected to surpass the number of cervical cancers by the year 2020. There are many different subtypes of HPV. Some are low-risk, or benign (non-cancerous),though they can cause genital warts. Several others are high-risk, or malignant, having the potential to cause cancer.

Rikki was diagnosed with oral cancer more than a year ago, but says he is now cancer free thanks to an experimental immunotherapy drug.

The 54-year-old musician initially received radiation and chemotherapy, like many cancer patients, but became concerned when the cancer appeared to be returning.

Rockett has a 3-year-old daughter, Lucy, and a 7-year-old son, Jude, with singer/songwriter Melanie Martel, from whom he filed for divorce in July 2015 after nearly seven years of marriage.