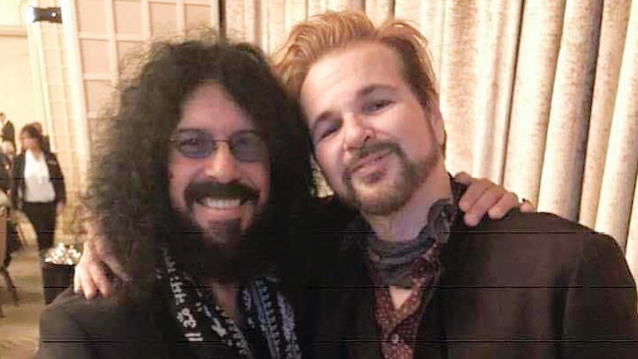 During an appearance on the latest episode of the "This May End Badly With Craig Fraser" podcast, POISON drummer Rikki Rockett spoke about his friendship with QUIET RIOT's Frankie Banali, who died last week after a battle with pancreatic cancer.

The 59-year-old Rikki, who went through his own battle with cancer five years ago, said (see video below): "[Frankie] and his wife contacted me about two months after he was diagnosed, 'cause they knew what I went through. So I called my doctors down in San Diego to see if there was a trial for him, because pancreatic is really a bad one. So they made the trip down there — they took all the information to my doctors in San Diego — and, unfortunately, there wasn't a trial, or a better trial, or any better treatment that was available at that time for that particular type of pancreatic. So they said, 'There's no point in you coming all the way down here. You can pretty much get the same treatment. We don't have anything different or groundbreaking for what you're going through.' But they kept an eye on him; they stayed in the loop. Regina, his wife, stayed in touch with him. And it went quiet for a while. And when I knew it went quiet, something was not good. When he was in the fight, I heard more from him and more from her.

"It's crazy, because I went through a similar thing," he continued. "And when you're in the fight, you kind of shut down a little bit from everybody. Because people, as well-intentioned as they are, like to tell you stories about somebody they knew that died. [Laughs] Or they want you to try injecting baking soda, or stand on your head when it's a full moon with CBD oil. I mean, all this crazy stuff.

"When you're going through this, you look at everything really quick, so it's not like you don't know what's out there," he added. "But there's legitimate cures, and there's not legitimate cures."

Rikki, whose real name is Richard Allan Ream, was declared cancer free in 2016 after undergoing an experimental treatment.

In June 2015, Rikki visited his primary care doctor with a sore throat. His doctor found a small tumor at the base of his tongue, and Rikki learned he had human papillomavirus (HPV)-related oral cancer. He endured nine rounds of chemotherapy and 37 sessions of radiation therapy. The tumor initially responded, but returned three months later, spreading to his lymph nodes. Rikki then saw Dr. Ezra Cohen at UCSD Moores Cancer Center, who helped him enroll in a clinical trial of pembrolizumab (Keytruda). Rikki's tumor responded immediately. Just over two months into the trial, a scan revealed that his tumor had shrunk over 90 precent. Today Rikki is cancer-free, enjoys playing with his band, POISON, caring for his two children, and practicing Brazilian Jiu-Jitsu.