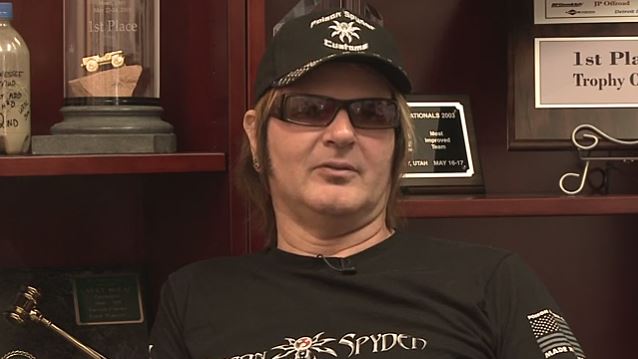 During a recent appearance on the "Stuck And Gunner" show, POISON and DEVIL CITY ANGELS drummer Rikki Rockett was asked which person he was most excited to meet over the course of his three-decade career as a professional musician.

"I actually met [pop superstar] Michael Jackson at a wedding reception," Rikki replied (hear audio below). "And every preconceived notion that people have about Michael, to me, it just wasn't that way at all. He was really cool, he liked [POISON's] 'Talk Dirty To Me' video; he was very complimentary, very nice. He was fighting with his girlfriend that night [and was] a little irritable. I don't know if he got whacked and weird later — maybe he did — but at that time, and this was probably, I'd say, mid-'90s, something like that, he was very cool. Very, very cool…"

He continued: "That's why when some of these other artists that say, 'Ah, POISON sucks.' Or this or that. It's, like, Michael Jackson was complimentary, David Bowie was complimentary.. I mean, after that, I just don't care. [Laughs] You get some guy on the Internet that goes, 'I've played drums for 15 years and you suck.' [And I'm , like], [dismissively] 'Okay.'"