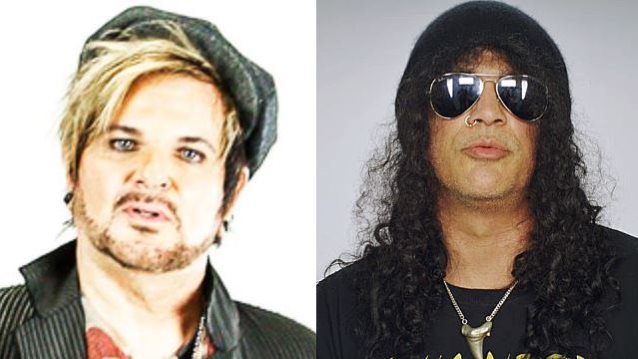 In a brand new interview with the "Decibel Geek" podcast, POISON drummer Rikki Rockett was asked how Slash came to audition for the guitarist slot in the band prior to joining GUNS N' ROSES in 1985. "Slash we had known," Rikki said (hear audio below). "'Cause he was in HOLLYWOOD ROSE… So Bret [Michaels, POISON singer] and I liked him; we all liked him. And he came and worked on some songs with us, but we continued to audition people even though he was a frontrunner… We didn't want, like, a hotshot Yngwie [Malmsteen-type] guy. We didn't want that. We wanted a rock, East Coast guy. And then C.C. [DeVille, current POISON guitarist] auditioned, and he just made more sense than Slash did. So it was a tough decision, because we all liked Slash. Slash was really pissed off about it. He was pissed. He was, like, 'What the fuck, you guys?'… So there was that rivalry between GUNS N' ROSES and POISON because of that, I think, for a long time, you know? And that's long gone. I see Slash and we're totally cool, you know what I mean? I haven't seen Axl [Rose, GUNS N' ROSES singer] in fucking fifteen years, but I've seen the other guys, and [there's] no problem."

Slash spoke about his POISON audition during a 2010 interview with Classic Rock Revisited. He said: "I was living in L.A. and I had just gotten done working in a band with Axl, actually, called HOLLYWOOD ROSE. Steven Adler was in that band as well. I just quit. I told Axl I couldn’t handle it anymore and I walked. That was right after the first time Axl and I ever worked together. Matt, the original guitar player for POISON, who was actually a pretty cool guy, had gotten his wife pregnant or they were getting married or something like that. He was moving back to Pennsylvania. He goes, 'You should try out for POISON.' I hated POISON but in those days you did whatever you had to do to keep moving. Being very ambitious, as I was, I went and auditioned for POISON. I ended up being one of two guitar players left that they were going to pick from. I remember kicking the shit out of the songs they had. There was no denying that I could play them but there was an issue about makeup and stuff. Bobby Dall [POISON bassist] asked me what kind of shoes I was going to wear. I was, like, 'What?' It was kind of obvious that this was going to go nowhere. As I was walking out of the audition, C.C. DeVille was walking in. He had on pancake makeup and a ton of hairspray. I actually remember thinking right then, 'That should be the guy.' The next day I got a call from Bobby and he said, 'You know, you are great and all but I think we are going to pass on you and go with this other guy.' It was C.C. and it really did make all the sense in the world. I was in a couple of bands after that and then we started GUNS N' ROSES."