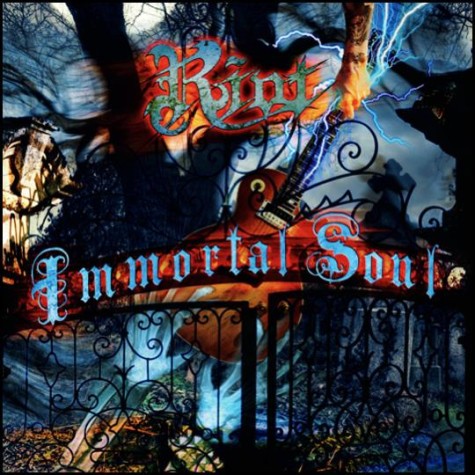 Kodi McKinney of MetalInsider.net recently conducted an interview with vocalist Tony Moore of the legendary U.S. metal band RIOT. A couple of excerpts from the chat follow below.

MetalInsider.net: You're down to tour for three dates in New York and Virginia, and then the five-day 70,000 Tons Of Metal cruise in Miami. What's the plan from there? It seems like there's a lot of support behind touring more.

Moore: That's something we're looking forward to spending some time talking about on the cruise. Since we're going to have five days together, and we only have to play a couple of shows, we'll have time to talk about exactly what we're going to do in the future. Because what we're discovering is that the response to the record has been great, but there are so many bands out there at our level. The market is kind of flooded. The economy is a disaster, both here and overseas — Europe, Japan — it seems like wherever our biggest fan bases are, the economy is making it really tough to put a tour together that makes money. The numbers that we're getting from the festivals are really far from the mark, in terms of making it affordable for us to do them. I mean, we're trying to come up with a plan; I don't know if that means getting on a leg of a tour as a support act for a bigger name or something, we're not sure. Right now, we picked a bad year to release a good record, and the world economy is making it hard to get out there. Our plan is to figure that out in January, and come up with a plan for spring.

MetalInsider.net: You're talking about how the economy's really changed. What are some of the economic difficulties you're running into compared to when "Thundersteel" and "The Privilege Of Power" were out back in the day?

Moore: Well, back in the '80s, the market was booming. It was an illusion, because there was a huge crash in '88-'89, but there was all of this fake money around, and we were on a major label (Columbia). So while we weren't being treated like royalty, we did have access to some tour support. When we went out and toured the States, we could go out in a big tour bus and be comfortable, make enough money to survive, and it was all doable. But right now, it seems to be the exact opposite. The promoters are coming back to us with numbers that are just not workable. We can barely cover our flights. It's a challenge, but it's a challenge that hundreds of bands in our situation are facing. So we'll come up with something. But the economic situation, and the difference between now and then, is pretty remarkable. And Japan has the additional challenge of still being in recovery mode since the earthquake and the tsunami. And for the fans too, it's just a matter of discretionary income. Out of a hundred albums that come out this year, you've gotta pick and choose which ones you're gonna buy, and it's being reflected in what we're seeing in terms of sales. Although, overall, we're pleased with how the album's selling, and especially pleased overall with the critical response, we're just dealing with the reality of a really bad overall world economy.

MetalInsider.net: Are you going to try to keep making records from here? Do you guys have a long-term plan figured out?

Moore: Oh sure! RIOT is absolutely gonna do another album, because, first of all, we had so much stuff written for "Immortal Soul" that we've got half of the next record written already. Everything from some basic ideas and licks to completely arranged songs; not that it's all recorded, but all the sketches are there, the parts are there. We had so much material that we had a really tough time deciding what to put on the album, and we had to let so many people listen to so much stuff to help us decide which songs would make the final cut. But yeah, we've got a ton of material! These guys write so prolifically, it's ridiculous. I was completely overwhelmed when they sent me the first song sketches; there were like 20 freaking songs! I was like, "Oh my God!" I just said, "Alright, I'm going to take them in order and write them one at a time and see what happens." And I was writing straight up until the very last vocal session. I'd change things in the studio as we go; as soon as they roll the take, I'm erasing stuff, I'm saying, "Wait, wait wait, hold on!" I'll change a syllable, I'll change a word, and then I'll change a whole line. The writing process went right up until a few days before we delivered it.

MetalInsider.net: Are you trying to do another record within the next year or two, or are you going to try holding it off for a minute depending on tours?

Moore: We're gonna let the album do what it does, because we have the right people behind it. We were shocked at how well-received it's been. We were ready for anything from, "Oh my God, this is a bunch of dated crap," to, "Why did they bother?" We were not ready for this consistently positive response, so we're just going to let the record do what it does. I'm not to the point where I can listen to it yet, because I'm still listening critically to every note; of course it's too late for all of that! So I haven't really evaluated this stuff in terms of where it sits in my progression of songwriting and what I want to do next. I'm going to have to just digest that and wait and see. But the guys already have so much other stuff written that I can start right now — well, actually I have started a bunch of stuff for the existing tunes. So yeah, the follow-up will probably be fairly quick. Since both of the labels we're working with have options for another album, they'll tell us when the market's ready because we haven't done enough with "Immortal Soul" yet. It'll be next month when we debut it live, so we'll see where it goes from there.

Read the entire interview from MetalInsider.net.

"Sins Of The Father" audio stream (courtesy of AOL's Noisecreep):