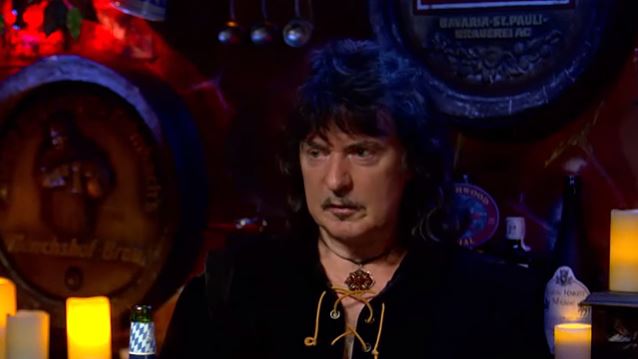 Ritchie Blackmore says that he has been prevented from attending DEEP PURPLE's Rock And Roll Hall Of Fame induction by the band's manager.

In a statement, the PURPLE co-founder claims that Bruce Payne has asked for the guitarist to be excluded from the ceremony in April.

Blackmore writes in a post on his Facebook page: "Ritchie was honored by the offer of induction to the Rock And Roll Hall Of Fame. He was discussing the possibility of attending, until we received correspondence from the president of the Hall Of Fame, who said that Bruce Payne, management for the current DEEP PURPLE touring band, had said 'No.' Therefore Ritchie will not be attending the ceremony. He sincerely thanks all the fans that voted for him for their support."

Paice recently said that any decision regarding a possible performance at the induction ceremony will have to be made with the blessings of all the current members. "We don't have salaried guys with [keyboardist] Don [Airey] and [guitarist] Steve [Morse]. They are fully accredited members of the band and they share in everything, and into decisions as well. They will have to be consulted and see how they feel about anything that the three of us originals think we would or wouldn't like to do."

This year's Rock And Roll Hall Of Fame induction ceremony will take place on April 8 at the Barclays Center in Brooklyn, New York.

HBO will air this year's ceremony on April 30.