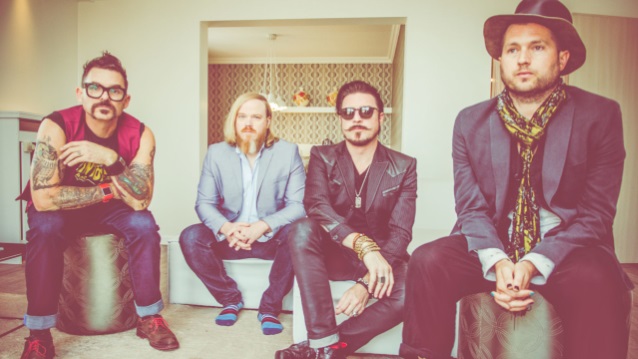 RIVAL SONS, the blistering, soulful Long Beach, California rock and roll band which has previously released four albums on the British label Earache, has moved onward and upward, signing a deal with Low Country Sound/Atlantic. The group has been hunkered down in the historic RCA Studio A in Nashville with Grammy Award-winning producer Dave Cobb for a release later this year.

Pete Ganbarg, president of A&R at Atlantic Records, commented: "We are thrilled to welcome RIVAL SONS to the Low Country Sound/Atlantic family. I've been a fan of theirs ever since my colleague Lea Pisacane came back from their Madison Square Garden show with BLACK SABBATH a few years back raving about how great they were. Having gotten a chance to really to get know the guys and work with them in the studio, I know that people are going to be blown away by their label debut. And to get to work together on this with Dave Cobb, producing them for his Low Country Sound label, is an absolute treat."

RIVAL SONS guitarist and co-founder Scott Holiday is no stranger to Atlantic, having signed a deal with the label in 2000 with his first former band HUMAN LAB. That group spent two years making an album for the company, but the disc was never released.

Scott told Planet Rock: "It's painful to make a piece of art and not having it see the light of day. But I saw how the record business worked. And after that experience, I had to run in the other direction. With RIVAL SONS, it's thirty days writing and recording each album."

Holliday added that it was a huge honor to be signed to the longtime home of such rock legends as FOREIGNER, AC/DC, THE ROLLING STONES, LED ZEPPELIN and PHIL COLLINS. "It's kind of romantic to be at this big, legendary record label," he said. "And fuck all the rock 'n' roll bands — if you want to get really romantic, look at all the soul acts they signed, like Ray Charles and Aretha Franklin. We're talking about the bedrock, soul and blues, some of the most important recordings in the history of the world.

"But I'm a pragmatic person," he continued. "There's a lot of work to be done. We've made five records and we've had some success, but hopefully signing to Atlantic, we're going to have a little more."

The band spent much of 2016 supporting the legendary BLACK SABBATH on "The End" world tour.

RIVAL SONS have also announced a short run of tour dates this May to bookend their appearance at Shaky Knees festival, their first in the U.S. in over a year.

Tickets go on sale this Friday at 10 a.m., with a special presale on Wednesday for e-mail subscribers.

Tour dates (all shows with WELLES):

*with J RODDY WALSTON AND THE BUSINESS