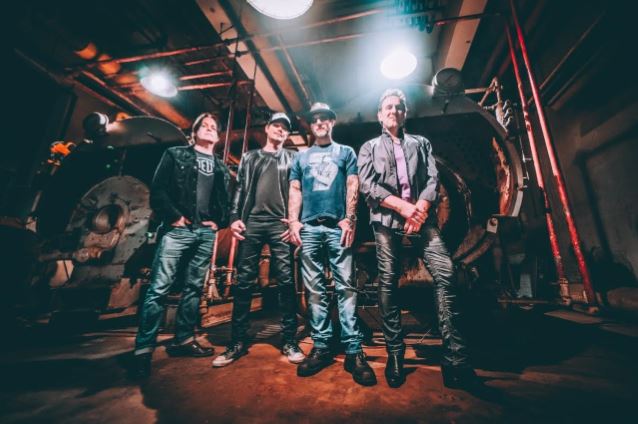 "California", the comeback album from RIVERDOGS, the band featuring DEF LEPPARD and LAST IN LINE guitarist Vivian Campbell, will be released on July 7 via Frontiers Music Srl.

Campbell ended up joining RIVERDOGS after being tapped to produce their first demo. As an official member of the group, he would contribute to their eponymous debut album in 1990.

Though fans and critics gave the LP a warm reception, lack of support from their record label eventually led the band to go independent, with Campbell departing the lineup. Releasing another two albums in Europe, the group continued to pick up fans before eventually disbanding.

RIVERDOGS gathered in 2003 to record new material and play a few reunion shows. Those new songs were recorded as demos, but never completed.

In 2010, MelodicRock Records approached band manager Paul Liszewski about a possible release of these songs. The band liked the idea so much an agreement was reached and over the course of a few week-long get-togethers, the lineup of Rob Lamothe (vocals),Campbell, Nick Brophy (bass) and Danzeisen recorded final versions of the 2003 tracks as well as writing a couple of brand new songs. Added to the new "World Gone Mad" album was one live cut from the band's 2004 reunion shows, a cover of the BADFINGER classic "No Matter What".

Campbell told "Hard Rockology" last fall about how he ended up becoming involved with RIVERDOGS again: "Frontiers, the label that LAST IN LINE are on, they called me and asked if I would be interested in doing another record with RIVERDOGS, but only under the condition that it was a rock-influenced record, very much in the vein of the original RIVERDOGS debut album from 1990, or 1991, whatever year it was. So I talked to the other guys and everyone signed off on it. So we got together in installments. We started, I think, back in March or April of [2016]. And you talk about working on a limited budget and time frame. Rob lives up in Hamilton, Ontario; Nick lives in Nashville; Marc and I are still in L.A. But Rob and Nick would have to fly in… We literally had Monday through Friday [to work on the album]. So Monday, Tuesday, Wednesday, we jammed and we wrote six songs. And Thursday and Friday, we went into the studio and demoed them. And then a month or two later, we did the same thing. Monday, Tuesday, Wednesday, we wrote six songs; on Thursday and Friday, we went in and demoed [them]. In July, we rented a big drum room in L.A. and Marc went in and re-did all the drum tracks. In September, during a break in the DEF LEPPARD tour, I went in the studio in Hollywood for, I think we had three days, and I did all the guitar tracks, all the rhythms, all the guitar solos… And I've gotta tell you, it sounds great, actually. It's a guitar-intensive record; there's a lot of guitar on that record. Ironically, there's probably even more guitar on that record than there is on the LAST IN LINE album."

Campbell also spoke about the circumstances that led to RIVERDOGS' debut album not getting the kind of attention that many people think it deserved upon its release in 1990. He said: "The RIVERDOGS was one of those lost gems. We kind of fell through the cracks of record-company policy. I remember the week that our record was released — the original RIVERDOGS album — we were playing The Roxy in L.A. and the new head of the record label, and English guy who had just come into L.A. the week before, and he took us out to dinner right before our debut show for the album. And he basically said, 'You know, I don't hear it. I don't feel this record. I'd like you to go in and make another one.' And our hearts just sank, 'cause we had invested over a year, probably about a year and a half, into writing and recording that record, just to have this guy come in and say, 'Ehhh, I don't hear it.' So, needless to say, it got buried — it just fell of a cliff. And ironically, it goes on to… It won an Edison Award of 'Rock Album Of The Year' over in Europe, and got great reviews and critical acclaim and sold about thirteen copies. [Laughs] It's just one of those things. C'est la vie."