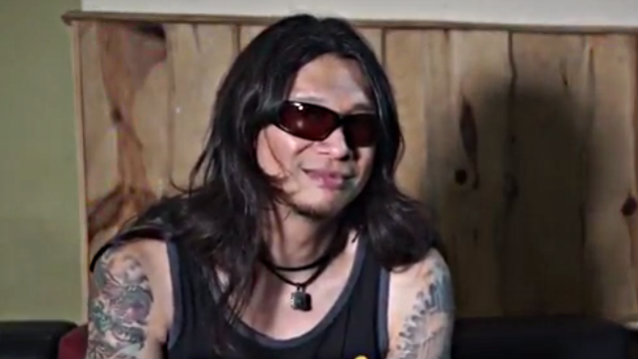 ROB CAVESTANY On DEATH ANGEL's Sound: 'We Try To Be A Little Barbaric With Our Music'

Claudia of the Austrian web site We Don't Care interviewed guitarist Rob Cavestany of veteran Bay Area thrash metallers DEATH ANGEL at this year's MetalDays festival, which was held July 23-29 in Tolmin, Slovenia. You can watch the entire interview below. A few excerpts follow (transcribed by BLABBERMOUTH.NET).

On the most important aspect of DEATH ANGEL's music:

Rob: "For me, the most important thing is getting the emotional expression across through the sound, through the music, through the melodies, the riffs, and of course, the lyrics. But, usually our songs start with music and then the lyrics come second. In the very first place, I'm just trying to express the mood and I'm also trying to imagine — because we play live all the time — I'm picturing the last tour we did and what parts of the music gets the crowd going and the certain reaction from the crowd and how it feels for us to play live, so these things are in mind as I'm just trying to spit out stuff and listen back and see what sounds good and what maybe doesn't sound as good as I thought it did at the beginning. It's mostly trying to convey the emotional expression. Then, after that, the technical things are on top of that. That's our style of music, at least from our band. We're a little bit raw and we're not like, crazy musicians, virtuosos. We try, we try, but we're a little bit… barbaric with our music. [Laughs]"

On whether he considers himself an artist rather than a musician:

Rob: "I'd like to think so. There's different aspects to the job per se. I think you have to recognize that. At some point, you're creating, so this is for me, happening by myself or something and I'm just with my own self and outputting stuff. Then, another case, you're producing. I co-produce our albums so then now you're looking at it from a technical aspect of capturing the music onto a recording. Then, of course, you're an entertainer and a performer when you're playing live or doing things in front of people, you're here to entertain. Then you recognize that and try your best to entertain and be interesting. Different people might say a different thing if you're interviewing them and their heart where they're coming from. That's up to them. To be honest, if you're getting onstage in front of people, you're entertaining whether you don't realize that, you should take a look at what you're doing. I think our band is quite entertaining. We definitely take that to heart and do our best to do that. We're fans of music. We go to concerts. We pay for tickets and watch the bands we love. And I like to be entertained by the band. It's all in one."

On what he would say about the band's most recent album, 2016's "The Evil Divide":

Rob: "By the time the album's out, to me, it's set. Everything I'm trying to say is there when you listen to the album. I want it to be known that we have this album called 'The Evil Divide'. It's our latest album and it's actually been out over a year now. It's just taken us a long time to get to Europe. We've been touring not in Europe for some reason. Yeah, just have a listen. Check it out. We're very proud of it. We love this album and play a lot of the songs in our live set. It's really fun to play the songs. The album means a lot to us, as do all of our albums, of course, but this is where we're at right now. This is the most current sound of our band."

"The Evil Divide" entered The Billboard 200 chart at position No. 98 with first-week sales of just over 6,000 units — nearly all from pure album sales. The set followed the No. 72-peaking "The Dream Calls For Blood", which opened with around 5,400 copies back in 2013.