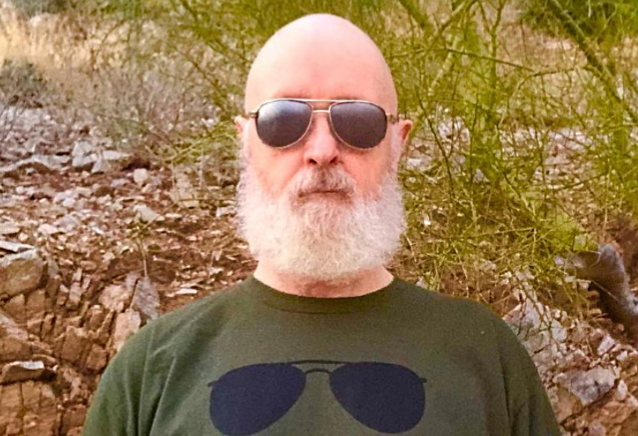 During an appearance on the latest episode of the "In The Trenches With Ryan Roxie" podcast, JUDAS PRIEST singer spoke about the progress of the songwriting sessions for the follow-up to 2018's "Firepower" album. He said (as transcribed by BLABBERMOUTH.NET): "I'm old school. We had one great big writing session last March for this new record that we're still working on. And what I mean by that is Glenn [Tipton, guitar] and Richie [Faulkner, guitar] and myself at Glenn's beautiful studio. And that's the way I personally write. I'm very spontaneous in my writing. Even before the lyrics and the melodies start, I'm there with Glenn and Richie, and I'm inspired and motivated by what they're doing…. What I'm saying is as far as the place that all musicians enjoy — being creative, being in a room with your bandmates and making a song and going, 'Oh, man. I can't wait for the fans to hear this.'

"'Firepower' was a beautiful achievement for us; I'm very, very proud of that record," he continued. "And, of course, when you set a bar, you always kind of go, 'Oh, now we've gotta try to knock one out of the park with the follow-up to 'Firepower'.' That can be a danger. I think you can get very easily misdirected by focusing too much on expectation. We've been making so long, we never second-guessed the final outcome; we've always played from the heart, from the gut.

"These [new PRIEST] songs that I've got with me, they're so good. I'm so happy and so proud of what we've got so far, and there's so much more to come."

"That was a great experiment," Rob said about the "Firepower" recording experience. "We didn't even know it was gonna work. Tom's classic old-school metal. Andy is from more recent times. And Mike, of course, just came [from doing] the '13' album with [BLACK] SABBATH; he had done a lot of work with SABBATH. So there's three heads working together. And we thought, 'This is either gonna be a trainwreck or something glorious,' and it turned out to be something glorious. So we're gonna at least recreate those same production moments. But having said that, it is all about the songs, and right now, the songs feel really, really strong."

Last September, Faulkner told SiriusXM's "Trunk Nation With Eddie Trunk" that the creative process for PRIEST's next LP was halted by the coronavirus outbreak, which disrupted global travel.