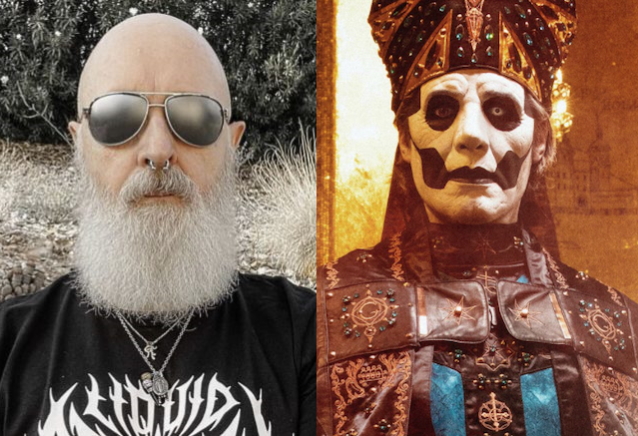 ROB HALFORD Loves GHOST: 'I'm So Happy' For TOBIAS FORGE, 'To See His Ambition And His Dreams Become So Real'

In a new interview with Finland's Chaoszine, JUDAS PRIEST's Rob Halford spoke about his appreciation for the Swedish occult metal band GHOST. He said: "I'm so happy for [GHOST leader] Tobias [Forge], to see his ambition and his dreams become so real. He's worked really hard to make GHOST into this worldwide experience, you know? And the guy's a great talent, fantastic performer on stage. [His] songwriting… the records are wonderful. I've been following his career since way back."

Back in 2018, Halford said he was hoping to work with Forge at some point in the not-too-distant future. "I was in the dressing room with Tobias from GHOST, and we talked about collaborative opportunities," he said. "It's fun for musicians to step into each other's world. It's like different football teams — it's the same game but a different play. I'm just very curious to see where my voice can fit in."

Two years ago, Forge confirmed that he "spent some time" hanging out with Halford. "That was cool," he said. "He's a fan of GHOST, which is crazy, because saying I'm a fan of his is an understatement."

In a 2018 interview with France's "Heavy1" radio show, Forge praised PRIEST's songwriting skills while discussing his appreciation for music from the 1980s. He said: "I am a big fan of what most people would regard as 'well-written' music. I like music that moves me and makes me feel things and, more than often, it's music that, I guess, falls within a certain sort of pattern, but that could be anything from FLEETWOOD MAC to VENOM. But, yes, I do appreciate a song that has a little bit of a standardized sort of dramaturgical pattern. But I think pop music… I think that JUDAS PRIEST writes pop music. They have a very pop sensibility to their music."

Halford has always been a great supporter of young talent, telling Metal Hammer magazine four years ago that the heavy metal scene was "in great shape." He said: "We've seen metal grow from basically two bands — ourselves and BLACK SABBATH — and it's fantastic that wherever you go in the world now there are metal bands of all different sizes.

"I'm listening to POWER TRIP, I really like what they're doing, and even they reference the roots of metal in their work. I love ELECTRIC WIZARD from the U.K. It's so diverse, and I love it all as well.

"I'm more of a classic metal guy, but I like what a band like IN THIS MOMENT, who I worked with recently [on a song called 'Black Wedding'], are doing. Across the board, metal is in great shape."