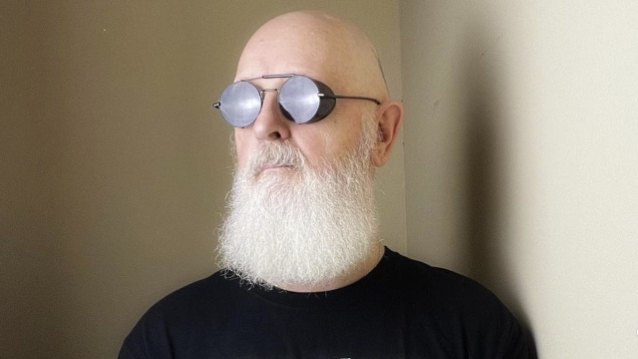 In a new interview with the Phoenix, Arizona radio station KSLX-FM 100.7, JUDAS PRIEST singer Rob Halford discussed his autobiography, "Confess", which arrived in September 2020 via Hachette Books. Co-written with Ian Gittins, the book offered readers a compelling, heartfelt and honest look at the struggles Rob has faced with addiction and his sexuality as well as exploring his music and his many brushes with controversy.

Rob said (as transcribed by BLABBERMOUTH.NET): "I was approached in my 30s. 'Rob, do you want to do a book?' I'm, like, 'No, dude. I've got more of a life to live.' And then there's a little bell [that] goes, 'Ping! It's time to do it.' So we put that together while the pandemic was going on.

"Thank you to everybody that took time to get into the book," he continued. "It was a real journey of self-discovery. 'Cause Ian Gittins, who is my guy — Ian did the Nikki Sixx 'Heroin Diaries' and a multitude of other great books. He was the master of taking it through the various parts of my life. And we got it done at long last."

Halford went on to praise Gittins further, saying: "He's great. He's a researcher. He pulls his stuff from all these different resources. Once you put a light on in my head, the lips start flapping… So, I'm relieved that, through my sobriety, I thought I had lost so much of this stuff in those murky years, but he was able to get me through that time, which we included in the book. So, yeah, we didn't miss anything; we didn't cut any corners. The difficulty came when we sent all these hundreds of thousands of words to the publisher, and then the editing team goes in. I'm, like, 'You cannot take that out. It's gotta stay in.' We had quite a bit of material left over — for the right reasons. That's why editors edit. So we're utilizing that in another project that we'll be talking about later on this year."

In "Confess", Halford discusses in detail what it was like becoming the first metal icon to announce he is gay in 1998 during an MTV interview, despite knowing about his sexuality since he was 10. Although his bandmates and their management knew he was gay and were accepting, he was advised to be discreet given the macho hetero nature of the metal world. He also opens up about surviving sexual abuse, as well as his struggles with depression, substance abuse, sobriety, and the suicide of one of his former partners. He also talks about how his own suicide attempt in 1986 led him to the rehab program that saved his life.

A year and a half ago, Halford told Sonic Perspectives about the book's title: "I would like to feel there are parts of this book which are relatable to others. Everybody is the same, as we all share similar life experiences. There are so many things that happen to us; we are almost identical no matter where we are from. I've traveled the world and seen how our music can touch people from all walks of life and professions. Confessing these stories or episodes is important, and it gives the reader a look-see into this guy that you only see from one point of view."