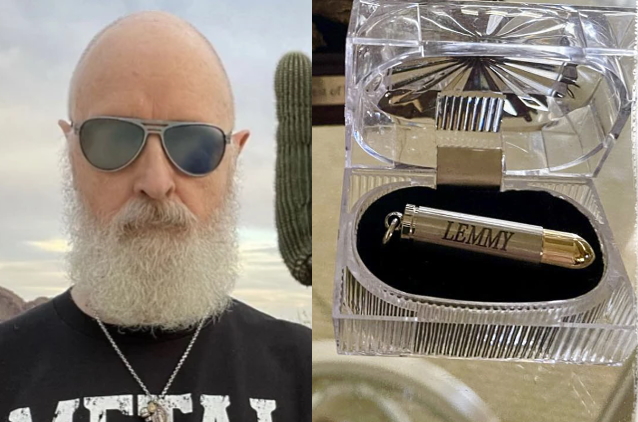 It was last November that Halford first confirmed that he was one of several people who received a bullet from Lemmy as a personal gift. He told to the "SpeedFreaks" radio show: "When Lemmy passed away, I had this beautiful opportunity to speak at his memorial. We had a great get-together; all of us musicians from all over the world, we met in Hollywood and we talked about Lemmy and his great life and the things that he's left us. And then, not too far back, I get something in the mail from the Lemmy people; Lemmy's office, his manager and everybody still work tirelessly to keep his name with us, as he always will be. They sent me — it's a bullet [laughs], it's a bullet with some of Lemmy's ashes inside of it."

He continued: "This is nuts. This is the kind of thing that Lemmy would have loved to have done. However you choose to interpret what I've just said, that's entirely up to you. But to be thought of, to be brought into this small circle of friends where you actually own a little bit of Lemmy's ashes and you wear it around your neck on a pendant and he's close to your heart in the truest sense in terms of his mortal remains, that's just mind-blowingly powerful. To use an object like that to carry his remains is just soLemmy — it's provocative, it makes you think, it makes you talk. But as far as having a beautiful part of Lemmy physically with me right now in my house, that's just magical."

When Wendy first revealed that she gave Rob with one of her husband's rings four years ago, she tweeted: "This was a ring I bought Ronnie when he first joined BLACK SABBATH, it has a cross on it. Rob was such a good friend of Ronnie's I thought he should have it."

In October 2020, Halford picked Ronnie James Dio as his "Rock God" in an interview with BBC's "The Rock Show With Johnnie Walker", stating about his choice: "Every singer will have a story about a fellow singer who was an inspiration to them. One of my main inspirations and someone that still is, to this very day, an inspiration in my life in metal, as a metal singer, is Ronnie James Dio.

"I can't remember exactly when I heard Ronnie's voice, but I do know that the first time I did hear it, it was just like an electric shock, a bolt of lightning, because this voice had so much power and so much character and so much energy and so much of everything that makes a great singer," he continued. "So from that moment on, I was a huge Ronnie James Dio fan. And I followed his career from pretty much when he first came to [be known] throughout the world of rock and roll. The great things that he did with ELF, and then, of course, with RAINBOW and BLACK SABBATH [and] HEAVEN & HELL. What a great legacy Ronnie's left. It's all about the voice. Even now, I always blast some Ronnie before I go out on the stage, because he psyches me up — he gives me the essence of what a great singing performance should do. I just love listening to the man. Not only his voice, of course, but also his great work in helping other people.

"If ever a man was a rock god, for me, it will always be Ronnie James Dio."

A free public memorial service was held on May 30, 2010 at Forest Lawn Hollywood Hills Cemetery in Los Angeles, attended by more than 1,500 fans, friends and fellow musicians.

This was a ring I bought Ronnie when he first joined Black Sabbath, it has a cross on it. Rob was such a good friend of Ronnie's I thought he should have it.
We had a great time at the show.