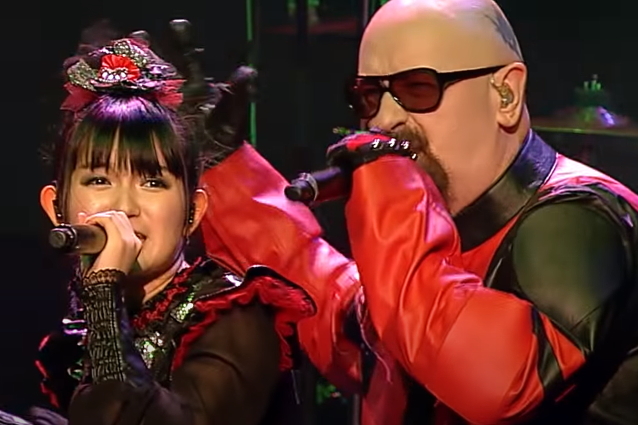 Rob Halford has revealed that he would love to write and record a new song with the Japanese pop-metal group BABYMETAL.

The JUDAS PRIEST singer, who performed the band's classic tracks "Painkiller" and "Breaking The Law" with BABYMETAL at the 2016 Alternative Music Awards, told Metal Hammer magazine: "I was delighted to be asked. It was such a hectic day that it was over in a flash, but it was a blast."

Halford's appearance with BABYMETAL saw "The Metal God" donning a new outfit that he acquired specially for the occasion.

"Once I knew I was going to do it, I thought about their outfits and went to the vintage store and got a black-and-red pseudo leather jacket, a black-and-red t-shirt from Amazon, and I bought some black and red sneakers as well," he said. "So, I actually put together an outfit exclusively for BABYMETAL. It's in my closet still somewhere."

Regarding a possible new collaboration with BABYMETAL, Rob said: "It would be great to jump in on a 'Gimme Chocolate!!' or a 'Headbangeeeeerrrrr!!!!!'. But even more than that, I would love to sing in Japanese, because I've never done anything like that. It would be a thrill to sing a BABYMETAL song, but rather than one of their existing songs, I'd like to do something unique. We could make a one-off special; that would be a dream. Maybe when PRIEST goes to Japan next, we can stop in a studio and do an original song. Call it 'Fox God Metal God'."

BABYMETAL's Su-Metal previously stated about her band's performance with Halford at the Alternative Music Awards: "It was really amazing and fantastic. A collaboration with Rob Halford, the 'Metal God,' has always been my dream. I never imagined that dream would come true!"

Back in October 2018, Halford praised BABYMETAL in an interview with Bandwagon, calling the Japanese band "one of the most unique metal experiences in the world right now. Not only their appearances, and their style and everything that surrounds them visually but they're an incredible band as well," he said. "I met the band a couple of years ago in America and they're so passionate about metal, they know everything about metal music and they've created a very special feeling and experience within the entire world of metal. They work extremely hard to create something unique and I think it's paying off and they're doing such an amazing job. In fact, I was watching the new music video for 'Starlight' and even with one member leaving, they still sound great."

A year prior to his performance with BABYMETAL, Halford posed for a photograph with the band backstage at the Rock On The Range festival.