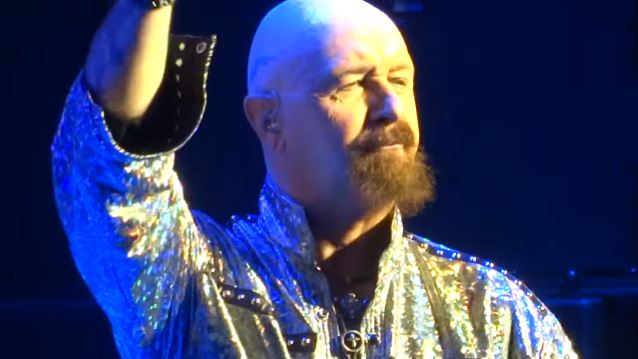 JUDAS PRIEST frontman Rob Halford says that he wants to keep singing for as long as possible, even if it means doing it "in the Badda Bing Lounge off the strip in Las Vegas."

In a recent interview with The Guardian, Halford revealed that he has unfulfilled musical goals outside of his "metal heart". He explained: "I've said before that by the time I'm 70, you'll find me in a little joint just off the Vegas Strip and I'll be going, [bursts into crooner-style singing], 'Breakin' the law, breakin' the law'.' Remember this one, folks? 'Livin' after midnight, rocking to the dawn …' I'll be drinking and smoking again, which I haven't done for 30 years, and I'll be leaning on the bar stool, like, you know, whatshername out of 'EastEnders'. I've said it jokingly. Or is it jokingly? Stepping outside of my comfort zone … I think maybe, as I'm in my senior years I don't give a fuck now, whereas maybe I used to."

Asked by the Broward Palm Beach New Times whether it's true that he has aspirations to become a lounge performer in the future, Halford laughed and replied: "I'm sorry I'm laughing about that! Sometimes I should keep my big metal mouth shut! I have a lot of fun with what I do, I've got to say that."

He continued: "It's a wonderful life, being in a heavy metal band. We take our music seriously and we take our performances very seriously, but you've got to be able to lighten up every now and again or else you'll go fucking crazy! But here's the deal: I want to keep doing this for as long as I can do it. I don't know how long that's going to be."