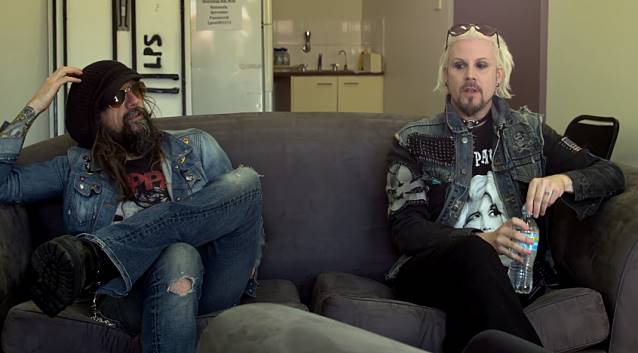 Soundwave TV conducted an interview with Rob Zombie and former MARILYN MANSON and current ROB ZOMBIE guitarist John 5 (real name: John William Lowery) on Sunday, February 23 at the Sydney stop of this year's Soundwave festival in Australia. You can now watch the chat below.

Rob Zombie will release a new concert DVD and Blu-ray, apparently titled "The Zombie Horror Picture Show", in May. The disc will feature footage filmed during stops on last year's Rockstar Energy Drink Mayhem Mayhem Festival tour in Houston on August 3, 2013 and Dallas on August 4.
Zombie has never released a concert DVD before and told an Albany radio station that he always thought of doing one as a "huge nuisance," adding, "After the show is done, I don't care. I don't want to relive it… I never wanna hear about it again, I never wanna see it again. Like, I never watch anything — a TV show I've been on; I don't care. Once it's done, it's done. But I figured at least once we should film it."

Zombie did roll cameras during his 2008 "Educated Horses" tour, but had very different plans for that still-unseen footage. "I didn't want to really just make a live DVD 'cause I thought, like, who cares," he told The Pulse Of Radio. What I really did was I made, like, a tour documentary, where like it starts with the first rehearsal through building the stage through, you know, traveling and flying and playing every show and after show and this and that. And, you know, it's so many hundreds of hours of footage."