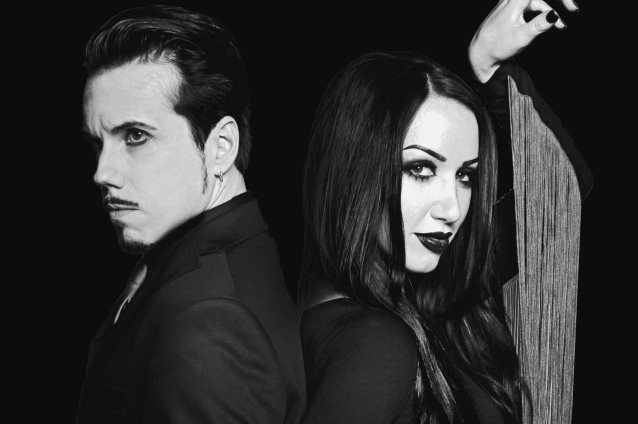 THE HAXANS is a brand new power-duo featuring Ash Costello (NEW YEARS DAY) on vocals and Matt Montgomery (ROB ZOMBIE) on vocals and guitar. A first taste of this unique goth- and pop-infused project comes via the track "Chains", which can be streamed below.

Says Ash: "THE HAXANS is like a '70s spook-show club dance party. The song 'Chains' is the first song that we recorded together and it has such a groovy vibe. The lyrics are about someone who is like a ghost in your life. Someone that just won't go away. This song is the direct message to them."

Matt states: "We're like a goth-pop Sonny and Cher. A death-rock Donny and Marie. It's a brand new sound from the underground!"

He tells the story of their first encounter: "Ash and I met and immediately slowdanced down the 'black carpet' at the Golden Gods Awards. The moment we met, I thought, 'now here's a girl who likes 'The Haunted Mansion' and 'Halloween' as much as I do… so, what would it sound like if we made a record together?' A year later, we were doing just that."

Ash adds: "The next time I ran into him was at the Hollywood Forever Cemetery. Later that week I got a message from him asking if I would be interested in doing a project together. What's really amazing about working with him is how easy it is. Songs just started forming organically, although it did take a while simply because of both of our busy touring schedules. This isn't like NYD, or anything I've ever done before."