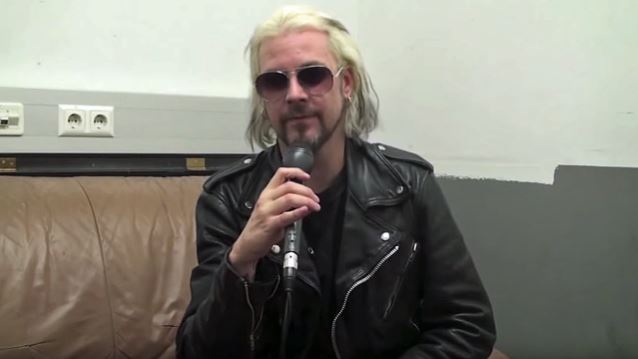 Rob Zombie and guitarist John 5 wrote and recorded a black-metal song for the fictional band LEVIATHAN THE FLEEING SERPENT featured in Zombie's 2013 movie "The Lords Of Salem". Asked how the track came about, John 5 told Austria's Stormbringer webzine in a new interview (see video below): "Rob just said, 'Come up with this crazy Norwegian black metal-type song,' and I was, like, 'Okay.' So we did it, and it's just so brutal and so crazy, and we wanted to make it sound really bad and all this stuff. And a lot of people don't know this —I don't know if I'm supposed to say this — but that's Rob singing. Yeah, that's Rob."

He continued: "Here's the story… since time has gone by now. But [Rob] came into the studio… [Laughs] this is so funny. He came in with [his wife] Sheri, and he had lyrics. And I don't think he even heard the song. He came in… He went in the booth, pressed 'record' and did his thing. And he goes, 'Good. I think that's good.' And then [he] walked out. And that was it. He did one take. I swear to God, that's a true story. It's so insane."

The video for the track, called "Crushing The Ritual", can be seen below.

Speaking to Revolver magazine, Zombie stated about his decision to include black-metal imagery in the film: "There's a band in the movie called LEVIATHAN THE FLEEING SERPENT, and they have a music video that they made for a song that's in the movie. It's sort of weird, though. For years, Norwegian black metal was the kind of music where I was like, 'Ah, I don't get it.' Then about five years ago, I was listening to DARKTHRONE or MAYHEM, and all of a sudden I was like, 'I get it now, and I fucking love it!' A switch just flipped in my brain. I like the music, and I wanted to include it in the movie. That character isn't part of any sinister plot in the movie, though. He's just there to add some background color."

Asked what kind of black metal he likes other than DARKTHRONE and MAYHEM, Zombie said: "I like the stuff that sounds really lo•fi. When we [Zombie, John 5 and drummer Aaron Rossi] were recording LEVIATHAN THE FLEEING SERPENT's song for the movie, my comment to the producer was, 'It sounds too good. Make it sound shittier.' To me, when it sounds shitty, it sounds scary. It sounds real. When the production is too good, it sounds cartoony and operatic. But when it sounds like shit, you're like, 'Yeah, this sounds like a bunch of guys who are gonna kill each other.'"

In addition to the LEVIATHAN THE FLEEING SERPENT song, the soundtrack of "The Lords Of Salem" contains classic songs from THE VELVET UNDERGROUND, MANFRED MANN, Rick James and RUSH.