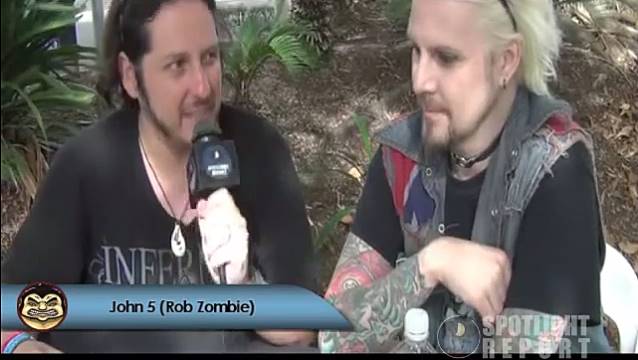 ROB ZOMBIE and KORN co-headlined last fall's "Night Of The Living Dreads" tour. The 17-date run began on November 3 in Reno, Nevada and wrapped on November 26 in Bethlehem, Pennsylvania.

ROB ZOMBIE's fifth album, "Venomous Rat Regeneration Vendor", sold 34,000 copies in the United States in its first week of release to land at position No. 7 on The Billboard 200 chart. The record arrived in stores on April 23, 2013 via Zodiac Swan/T-Boy/Ume. The CD was produced by Bob Marlette, who has previously worked with everyone from BLACK SABBATH and ALICE COOPER to WILSON PHILLIPS and LYNYRD SKYNYRD.

ROB ZOMBIE will kick off a 12-date run of shows on April 26 in Fort Myers, Florida at the Fort Rock festival, mixing other major rock festival stops with headlining shows before wrapping it up on May 10 in Camden, New Jersey.