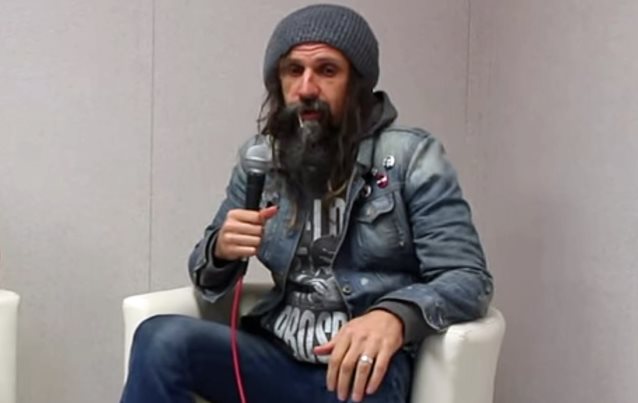 ROB ZOMBIE Is 'Not Overly Concerned' With People Buying His Music

APTV’s Ryan J. Downey conducted an interview with Rob Zombie at this year's Louder Than Life festival, which was held October 3-4 in Louisville, Kentucky. You can now watch part one of the chat below. A couple of excerpts follow (transcribed by BLABBERMOUTH.NET).

On lineup changes in a band:

"Being in a band is hard — not hard work, but it's hard holding people together. You have four people, and especially when you're younger, it really is hard to hold them together, especially if you get success, because success usually amplifies the worst aspects of most people's personalities.

"It took a long time to find the right people [that] we have now. This has been the longest we've held a group together. It comes and goes.

"When I made my first [solo] record, 'Hellbilly Deluxe', that was a really solid band — I really liked that band — and we did two records, and then, somehow, it all starts falling apart. And sometimes it doesn't even concern me. It's, like, they start getting at each other and they're not talking. And touring with a band where the guitar player won't speak to the bass player, and the bass player won't speak to the drummer, you can fake it for a while, but it really becomes a drag.

"That was depressing, because I went through that with WHITE ZOMBIE, which totally just degenerated, and then I got a new band together. And I was, like, 'This is fucking great! It's so fun playing.' And then a couple of years go by, and it was exactly the same situation. And that's when I sort of… I stopped for a couple of years, and I was just doing movies, because I was, like, 'This is just exhausting, trying to hold this together.' And then John [5, guitar] came in, and we actually went through some more of that, with people coming and going, until… Twenty-five years later, I think I have [the right set of people playing together]."

On his forthcoming solo album:

"We haven't been working on the record for a really long time. What happened was, we spent about a year on the record, but not working solidly. We would work on it for a couple of weeks, break it down, go back on tour. So we would record, go back on tour, come back, record, go back on tour… But what really happened was it gives you a chance to really live with the songs, so you can really hone them down and go, 'Wow! Now they're really fucking good. I'm glad we didn't put it out six months ago, because we hadn't listened to it enough.' And then, for me, a movie creeps in. I make the movie… And then… I was gonna put the record out about six months ago, but that was gonna coincide with the movie, so I would have had no chance to promote the record at all. So you're basically taking a great record and just knowing you're flushing it down the toilet. So, yeah, I just held it 'till… It'll be early next year to when I knew there was time to put it out properly, make a lot of videos, go on tour.

"I'm definitely gonna make a video for every song, or make a movie that goes with the whole thing — something. 'Cause at this point, selling records is… I don't even think about it. It's a complete waste of time; it's a complete waste of brain power. But I just wanna do some visual content that makes the songs stick, because I still care about the music and I still care about people hearing the music. I'm just not overly concerned with people buying the music."

On the importance of making physical product as special as possible so that fans will want to own it:

"That is just a dying thing, and I know it is. Physical product is just sort of a thing of the past. I mean, sure, we still do it, we still make it, we still try to make it great, 'cause there is a certain percentage of people that do like that, but it's very small. So that's why, to me, it was all about making visual content that would live online, because I think that's where the majority of there people hear and see the music. And that's all I care about — just getting it out there. And that was part of the reason why we couldn't break down forever and not tour, because it wasn't worth not touring to do that. Everything sort of balanced out, because, strangely enough, as record sales have gone down to nothing — like, you can definitely get a No. 1 record with your worst-selling record ever, which is always kind of funny — concert attendance has gone the other direction; that's gone up."

The rocker-director's next feature film will be an adaptation of Steve Stoliar's memoir, "Raised Eyebrows: My Years Inside Groucho's House". The book tells the bizarre story of the last years in the life of Groucho Marx, told by a young Marx Brothers fan who spent those years as his personal secretary and archivist.