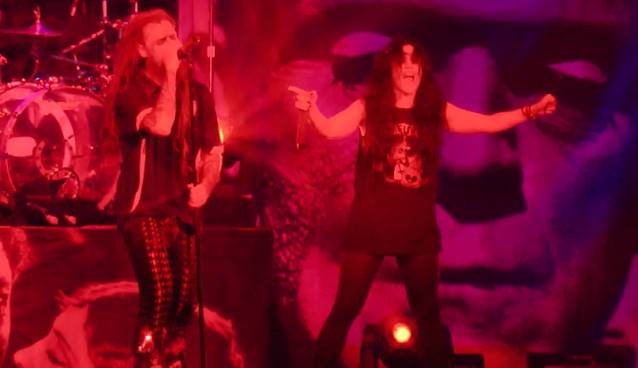 LACUNA COIL singer Cristina Scabbia joined ROB ZOMBIE on stage last night (Friday, June 27) at Alcatraz in Milan, Italy to perform a cover version of the DIAMOND HEAD classic "Am I Evil?" Fan-filmed video footage of her appearance can be seen below. Photos of the concert are available at Soundsblog.it.

LACUNA COIL supported ROB ZOMBIE on a six-week U.S. tour in 2006. Scabbia stated at the time: "We all know how much Rob influenced the scene and how great his live shows are."

Zombie's first-ever concert film, "The Zombie Horror Picture Show", came out on May 20. The set features Zombie leading his band through longtime favorites like "Living Dead Girl", "More Human Than Human" and "Dragula". The movie was filmed during stops on last year's Rockstar Energy Drink Mayhem Festival tour in Houston on August 3, 2013 and Dallas on August 4.

A photo book by photographer Rob Fenn is being published as a companion to the Blu-ray and DVD.