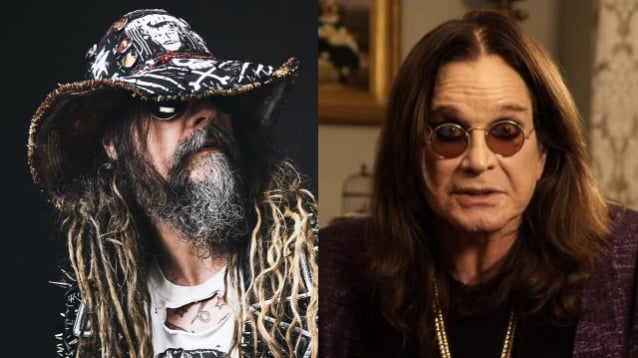 Rob Zombie recently connected with Apple Music's Zane Lowe to discuss his artistic inspirations and history with WHITE ZOMBIE. Rob also talked about his relationship with Ozzy Osbourne and the unusual first encounter they had together. You can now watch the chat below.

Speaking about Osbourne, Rob said: "Ozzy's great. I've known Ozzy for a long time. We toured together for the first time maybe 20 years ago, but I met him before. The first time I met Ozzy was really weird. I went to his house — I don't remember why — and that was where I met him, at his house. And I thought, 'Oh, there's gonna be a bunch of people. My manager will be there, [Ozzy's wife] Sharon will be there.' And it ends up with just me and Ozzy by ourselves; I just met him. And he's, like, 'Oh, Rob. I wanna play you my new record.' So he puts on his new record. I think he's gonna play one song maybe. He plays the whole album, looking directly at me, singing most of it. And I'm simultaneously thinking, 'This is awesome,' and, 'This is so uncomfortable, I don't know what to do.'"

Rob's latest comments come more than a decade after he said that he buried the hatchet with Ozzy over the way two of his bandmembers — bassist Rob "Blasko" Nicholson and drummer Tommy Clufetos — were hired away by Osbourne for Ozzy's touring band. Nicholson was hired by Ozzy in 2006 while Clufetos left in 2010, leaving Zombie in desperate need of a drummer.

Zombie and Ozzy have been friends for a long time. They collaborated on a song called "Iron Head" for Zombie's second solo album, 2001's "The Sinister Urge", and Zombie directed a video for Ozzy's 2001 single "Dreamer". Zombie has also toured with Ozzy several times.