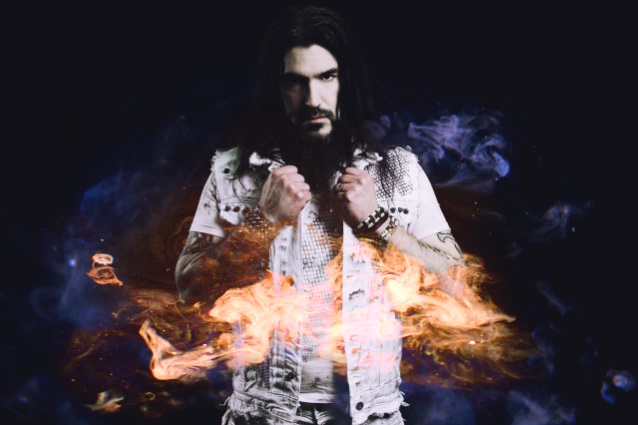 MACHINE HEAD frontman Robb Flynn was interviewed on a recent episode of the "That's Not Metal" podcast. You can now listen to the chat using the SoundCloud widget below. A couple of excerpts follow (transcribed by BLABBERMOUTH.NET).

Robb: "It was a big record for us. It was kind of an important record for us, I think. I felt like we really needed to grow in a different… I mean, I'm constantly asking myself, 'What can we do or say differently?' And I felt like with that record, when we hit on 'Now We Die', I was, like, 'Wow! This is something really… We've never done this. We've never been here.' You know, album number nine. That was album number eight. How do you fucking surprise people? How do you blow people away? I'm older. I'm the 24-year-old fucking thug running around the streets that I was on [1994's] 'Burn My Eyes'. I can't go there again, and I'm never gonna go there again, so I have to go someplace else. In some ways, it's, like, I just feel lost half the time. [Laughs] Like, where the fuck am I going? Jesus! But I just keep on going."

Robb: "I think that people look at my life and they wanna put a period at the end of it. And they go, 'Okay, this is this section,' and, 'This is this section.' For me, I'm just living my life, and for every 10 moments you see in public, there's 100 moments that you never see. And so for me, it's just, like, I'm just living and I'm just learning and I'm just going along with the things that are exciting me and getting my dick hard. And you start writing. There's no plan. There's never a fucking… We just start writing and 10 months later, we've got the songs that we have, and sometimes they're more in line with one part of what the MACHINE HEAD sound is and other times they're just a little off, and [MACHINE HEAD's upcoming album, 'Catharsis', is] just a little off. This one, we just got in the weird zone, and we were, like, 'I like this weird zone that we're in here. This is good.'"

On whether 2016's standalone single "Is Anybody Out There?" was "testing the waters" on anything:

Robb: "That was… I felt that chorus… I was, like, 'This fucking chorus is awesome.' I loved it, and I was, like, 'We've gotta put this shit out, 'cause this is so good.' If it was testing the waters, it wasn't really in a musical sense. It was really, like, 'Hey, can we put a song out digitally — no CD, no physical thing attached to it — and see, will it work for a band like MACHINE HEAD? Yeah, we know it works for pop bands, we know it works for hip-hop artists, but can it work for a band like us? And it fucking did — it's [MACHINE HEAD's] number two song on Spotify now, after a year, which is crazy to me, because it came at the end of a 20-month tour cycle. It came four months after it ended. And then no CD… 'Now We Die' had a video attached to it, had a record, had a huge tour, and yet somehow that song has surpassed that. 'Game Over' had all this push from [SiriusXM satellite radio's] Octane, 'Beneath The Silt' had all this push from Octane, but somehow it just came out, man, and that worked. So testing the waters in that sense was a success for us."

"Catharsis" will be released on January 26, 2018 via Nuclear Blast. The effort will be made available in several formats, including a CD/DVD digipak edition which contains footage of MACHINE HEAD's 2015 concert at San Francisco's Regency Ballroom.