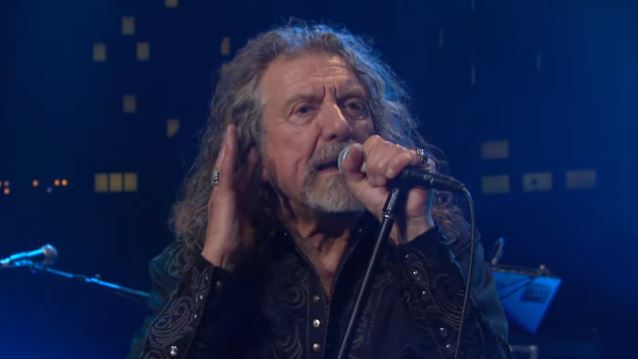 The December 10, 2007 performance during the Ahmet Ertegun tribute concert was chronicled on the band's 2012 "Celebration Day" CD and DVD. The set, which featured Jason Bonham subbing for his late father John Bonham on drums, marked Plant, Jimmy Page and John Paul Jones's first full-scale concert together since John Bonham's 1980 death.

Asked by Rolling Stone magazine how he looks back on that night, Plant said: "It was magnificent. We hit a home run that night, which is something that we were really fearful of. There was probably more riding on that than we would care to believe.

"Our performance was crucial, but we could reproduce sound in a much more reliable way, so we could be kickass, and sound kickass," he added. "Some of those horrific gigs way back were lacking in quality."

After the the O2 Arena concert, Page and Jones were looking for a way to keep working and tried out several singers, including AEROSMITH's Steven Tyler and ALTER BRIDGE's Myles Kennedy.

The option for a three-quarter ZEPPELIN reunion ended when Jones accepted an offer to form THEM CROOKED VULTURES with Dave Grohl and Josh Homme. Page later said: "I guess that was a pretty definitive statement."

Page said "the LED ZEPPELIN question" is never far from people's lips, joking, "People ask me nearly every day about a possible reunion. The answer is 'no.' It's been almost [a decade] since the O2. There's always a possibility that they can exhume me and put me onstage in a coffin and play a tape."