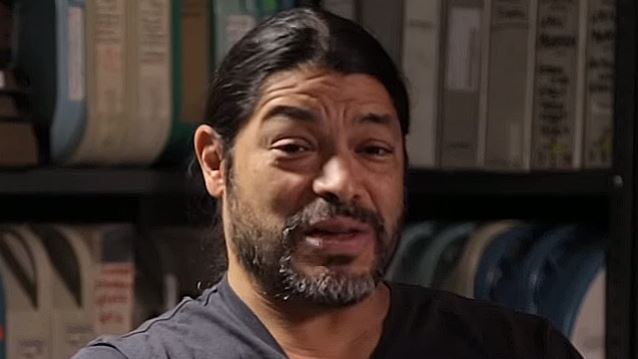 METALLICA bassist Robert Trujillospoke toSo What!, the magazine of The Metallica Club (usually known as Metclub),the official METALLICA fan club, about the progress of the recording sessions for the band's long-awaited follow-up to 2008's "Death Magnetic" album. He said: "I can say James [Hetfield, METALLICA guitarist/vocalist] and I had a blast doing back-up vocals last week, it was probably the most fun I've had during this album cycle; I wouldn't even call that work. It was just super fun blasting out those choruses. He had a big smile on his face and so did I, so that's something that I'll always remember, because I don't think I've ever done it on that level. I mean, we've done a couple things here and there, but that was a first for me, to be in the vocal booth with him. It was pretty cool. So I feel great. The bass sounds are crushing. I would say they're the best bass sounds that I've had with this band, for sure, and already for me that's a plus. I'm very proud of what Greg [Fidelman, producer] has done with the sound of my instruments, and I'm also proud of the way I played. We've had fun."

Trujillo also talked about his role in METALLICA and whether Hetfield and drummer Lars Ulrich appreciate his work ethic and positive attitude. "I think so," he said. "I know it's important to James. I think there is a level of respect from him in knowing I'm staying on my game, so to speak, and that I'm happy. I think that's important to him that Robert Trujillo from METALLICA is happy with what he's doing as a musician, and that he's happy with what he's doing as a musician in METALLICA. But he also respects where I come from and what I did, and he likes the INFECTIOUS GROOVES music. He likes my style with that band. Not to say that that style specifically with the INFECTIOUS GROOVES is the style that's supposed to exist in METALLICA. No. It's not about that, he's more interested in celebrating what was good about SUICIDAL or INFECTIOUS in the same way Lars is. I think one of his favorite top ten albums quite possibly might be 'The Art Of Rebellion' by SUICIDAL TENDENCIES, you know? He turned me back on to that album, okay? I forgot about that record. And he was talking about the record, about this one song, and I didn't know what one he was talking about because it had been so long. And then he had Kent [Matcke, METALLICA engineer] put it on the PA system in the studio, and then I'm listening to it going, 'Oh, shit. Yeah, that is good.' All of a sudden, it's coming back to me. And then what's funny is, I'm driving home from the studio about an hour later and then I realize that I wrote the song. I didn't realize that it was actually a song that I'd written."

Trujillo also spoke about the level of care and attention to detail with which METALLICA approaches every project. "The thing about METALLICA is everything is top notch," he said. "There's always gonna be a focus on detail, and whether it's stage production or preparing a song, even a cover song. I mean, look at the nurturing process that happens with a cover song in the METALLICA universe. When we did the Ronnie James Dio 'Ronnie Rising' medley, you know? That composition to me encompasses the energy and the focus in developing and creatively collaborating jumping into what would be essentially a cover song, or a batch of cover songs. There's a lot of focus that goes into that, and I think that quality separates METALLICA from a lot of other bands."

He continued: "There's just a lot of… how do you say it… a lot of pride that goes into every note that is played, even on a cover song let alone an original. The other thing that I've learned with METALLICA too is, the band is not afraid to take chances. The Lou Reed album ['Lulu'] is a fine example. A lot of METALLICA fans didn't like that record. For us, it was a great learning experience, and there were a few magic moments in there. I mean, in my career as a musician for as long as I've been doing this, there were a couple of magic moments that I would never really be able to explain to a person who doesn't understand what happens when you're connected, and when musically there's a certain energy. And I always value that, I keep that close to my heart because there was magic. So the point is, whether it's playing with an orchestra or Lou Reed or whatever, the band takes chances and tries different things."

METALLICA's new album is currently being mixed for a tentative fall release.