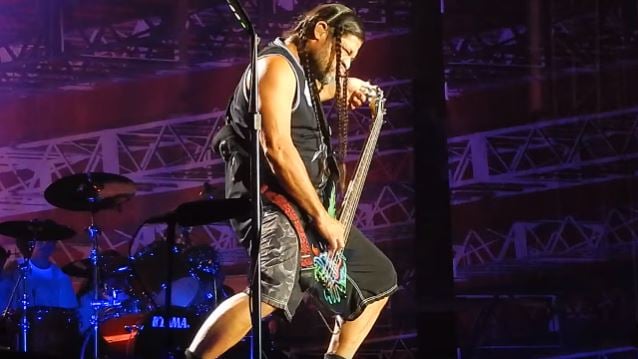 #PunkRockPolitics recently conducted an interview with METALLICA bassist Robert Trujillo. You can now listen to the chat using the widget below (starting at around the 36-minute mark). A couple of excerpts follow (transcribed by BLABBERMOUTH.NET).

On the fan response to METALLICA's tenth studio album, "Hardwired...To Self-Destruct", which is scheduled for a November 18 release via Blackened Recordings:

Trujillo: "The thing that's so exciting for me is I feel, for me, that my launchpad with METALLICA was actually [2008's] 'Death Magnetic'; that was a collaborative experience for me with Lars [Ulrich; drums] and James [Hetfield; guitar, vocals]. And then you get into the second phase of the journey, and it's got elements of that, but then it's kind of got other elements too, where it is thrash, it is in your face. Maybe the dynamics are a little different than a song like 'That Day That Never Comes', which is a great song too, but it's a different experience. The signature's always gonna be there. And I know — fans will always have an opinion, and they're always sort of gonna be, like, 'But I want…', 'I want this' or 'I want that,' or 'METALLICA sucks now.' You get that all the time. 'METALLICA used to be good.' You can't win 'em all. But the whole thing that I find great about this band is we take chances. We like to challenge ourselves. We're doing the best we can, and to hopefully still have revelant music in this day and age. And also, it's fitting with the times, you know what I mean? There's a lot of confusion out there; a lot of people are losing it, to a certain degree. So I think this is appropriate; it's therapeutic music."

On where "Hardwired...To Self-Destruct" fits into today's world:

Trujillo: "For me, music is a release; it should be therapeutic. I know there's certain types of music I like to listen to at certain, sort of, moods. And what I find about the new record is it's got… People that like that hard-driven — no pun intended — but that hard-driven, hardwired state of mind — and I mean this in a productive way; I don't mean it in a negative… They can release whatever frustrations they have through listening to a METALLICA song. That's what it's all about."

On the "Hardwired...To Self-Destruct" production and musical direction:

Trujillo: "I'm very proud of the production. I love the drums and the bass on this. I feel that our producer Greg Fidelman, who actually engineered the 'Death Magnetic' album, I always thought it would be great… No disrespect to ['Death Magnetic' producer] Rick Rubin, because Rick was vital and super important in getting Lars and James to reconnect with the thrash roots. Having someone like Rick guide them into that, or help, at least, guide them into that, I think, was super, super important at the time. And then I also feel that just over the years, the challenges that we've taken as a band, learning the 'Black Album' top to bottom and going out and touring that, was really, really cool, because there were some songs that had never been played live, like 'The Struggle Within'. There's a challenge that you have, as you get older as musicians, a lot of guys, a lot of bands take the other route, like, 'Man, I'm not playing 'Dyers Eve',' or 'I'm not playing…' 'I don't wanna die. That's way too physical.' We kind of go against the grain — not that we don't complain or Lars doesn't say, My arm's gonna fall off.' But I think that going through those experiences [like playing] 'Ride The Lightning' in its entirety, even 'Kill 'Em All'… We did that a couple of years ago, right down to [the bass instrumental] 'Anesthesia (Pulling Teeth)', was kind of crazy. It was, like, 'Oh, by the way, let's play this song…' Not me, but Lars. And it's, like, 'Let's play the whole album, and you've got, like, three days to do it.' [It's] those kinds of challenges that drive you crazy. They're good; they make you better. And I think the one thing about this new record, too, is there's a groove. Even though it's fast and there's a lot of that energy and there's twists and turns — some of it feels like this frantic journey — I feel it's tight, and I feel that there's a pocket there that is important, and we've sort of fallen into this groove as a rhythm section and as a band. So I'm excited. I'm excited to play these songs live and hopefully blow people's minds."

Instead of a previously announced bonus disc of demos, the deluxe edition of "Hardwired...To Self-Destruct" will now feature a number of cover songs that METALLICA has recorded over the past few years, including a medley of Ronnie James Dio songs, IRON MAIDEN's "Remember Tomorrow" and DEEP PURPLE's "When A Blind Man Cries".

The deluxe version will also feature a live set recorded at Rasputin's in Berkeley, California on Record Store Day 2016 and a live version of the new song "Hardwired" recorded in August at U.S. Bank Stadium in Minneapolis.

METALLICA will will next appear at Neil Young's Bridge School Benefit in Mountain View, California on October 22 and October 23.