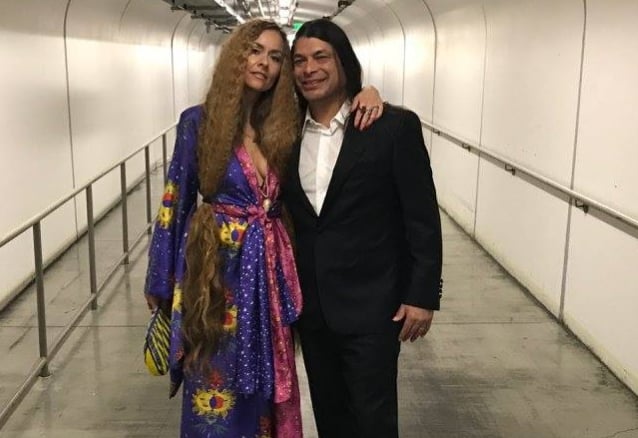 Artist, fashion designer and musician Chloe Trujillo, who is the wife of METALLICA bassist Robert Trujillo, was a guest on a recent episode of the "Honest AF Show". You can now listen to the chat below.

Asked how she and Robert met, Chloe said (as transcribed by BLABBERMOUTH.NET): "He was playing in SUICIDAL TENDENCIES. We met in the '90s. I was still in high school. It's funny, because I was always part of that punk rock, metal scene — ever since I was, like, 12 [or] 13 — and I would go to a lot of shows. We met [while I was still living] in Paris. I became really good friends with a guy — I'm still friends with him. He's older. He was kind of a big-brother figure to me… And he was really good friends with all the SUICIDAL guys. And they played a lot in Paris. I became really good friends with Rocky George and Mike Clark. This was before cell phones. They would call me up every time they would come into town: 'Let's go out.' And Robert would always be there. But it's so funny, because I was just hanging out with those two guys. Robert would be kind of there, but I never really talked to him except for just random things, but not really hang out."

She continued: "I lived in New York for two years, and I did musical theater and cabaret stuff there. And after two years in New York, I moved to L.A. I didn't have any contact [with Robert during that time], 'cause Ozzy barely played in Paris. I hadn't seen Robert in years. I only saw him once — they played Donington festival in England sometime in the '90s; I don't remember when. But then I hadn't seen him. So I wasn't thinking of him at all until my friend — the older brother figure [I mentioned earlier] — called me and said, 'Hey, I told Robert you were in L.A. now. He wants you to call him.' So I'm, like, 'Okay. All right.' And it's funny, because I leave him a voice mail and then I don't hear anything from him. And then my friend calls me back saying, 'Robert called me. He was in Tahiti surfing. And he was checking his message from a pay phone, and he mistakenly deleted your message. So he wants you to call him back.' And I'm, like, 'Is this a joke?' And I'm, like, 'Okay. I'll call him back.' And then we kind of got together.

"It's so funny, 'cause I tell him that too now, and he hates when I say this, but I was at the point in my life where I came out of relationships that were kind of horrible," Chloe added. "And I was, like, 'No more. I'm just gonna focus on my career. That's it.' And so when Robert asked me on a date, because I knew him from before, I didn't wanna hurt his feelings. I said, 'Okay.' But then deep inside, I was, like, 'Fuck. What's happening?' I was, like, 'I wanna focus on my career. I don't wanna fall into that trap anymore. I don't need this in my life.'"

Asked if she was attracted to Robert and whether she ever thought of him "that way," Chloe said: "Not really. I always thought, 'Oh, yeah, he's cute,' whatever, but I never really thought of him like… It's not like, 'Oh, I saw him and I fell in love' — it was not like that at all. So when he asked me on a date, I was almost, like, 'I don't wanna hurt his feelings.' And even the following day, after I saw him, he was calling me right away. I didn't even pick up my phone. I was, like, 'What does he want? I saw him yesterday.' And it went to my voice mail. Then I heard his message, and it was actually cute, 'cause he was, like, 'Me and a bunch of friends, we're gonna go see that movie tonight, if you wanna come.' So I called him back, and I said, 'That sounds good,' because it's like a bunch of friends; it's not like a date. And then I don't even know when things shifted, because it happened so naturally."

Chloe was raised in Paris by fashion designer parents and an opera singer grandfather, and grew up surrounded by music, beauty, art and design. She has enjoyed success as a fine artist, designer and musician. Her work has been exhibited in group and solo exhibitions in Paris, Los Angeles, and San Francisco. Inspired by music, as well as art, Chloe spent years performing in bands, cabaret acts, rock operas and off-Broadway. She continues to write and record and collaborate with some of music's most influential composers and performers.

Robert and Chloe have a son, Tye, and daughter, Lullah.