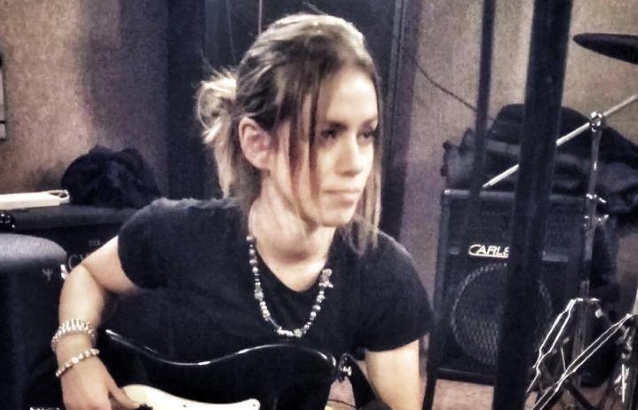 ROCK GODDESS — the female power trio from the days of NWOBHM (New Wave Of British Heavy Metal) — has announced the addition of bassist Jenny Lane to the group's ranks.

Not to be confused with various other musicians of the same name, a professional wrestler or the popular BEATLES classic "Penny Lane", Lane is a London-based musician best known for clogging up Portobello with her incessant bass playing.

On arrival in the capital from her home town of Bournemouth, she joined soul rockers FEEN before heading out around the U.K. and Switzerland with grunge trio THE GRAPHIC. Following the band's demise, she became a regular member of KATMANDINO from 2015 to 2017, as well as joining garage punk upstarts ELECTRICS.

Jenny recently completed a stint with MICKO & THE MELLOTRONICS and is also known for being a prolific moonlighter, having been a stand-in for many bands who've found themselves without a bass player, including THE FEATHERZ, THE SD5, MAD DOG BITES, EASTROAD, HELLHOUNDS, Albie DeLuca, Reinaldo Andreatta (MY NEW DEVICE),to name but a few. She also appeared on former KARNATAKA drummer Jimmy Pallagrosi's cover of TOTO's "Girl Goodbye".

When not providing low-end rumbling on other people's music, she can be found fronting her own band, PLANET OF THE CAPES. Best described as "shouty," this three-piece also features ELECTRICS drummer Mike Vick and HELLHOUNDS guitarist Keith Garrett.

Jenny says: "I'm beyond thrilled to be joining such an iconic band. Can't wait to meet you all. See you out on the road soon!"

Due to "illness, manufacturing and scheduling factors," the release date of ROCK GODDESS's comeback album, "This Time", has been pushed back to February 22, 2019 from the previously announced October 5, 2018. The effort, which will be made available via the band's own label, Bite You To Death Records, in conjunction with partners worldwide and digitally via Cargo Records, was recorded earlier this year at a London studio with producer Wes Maebe (UB40, Robert Plant, NEW MODEL ARMY, PRAYING MANTIS).

ROCK GODDESS recently parted ways with bassist Tracey Lamb. The band announced her departure after saying that she would be "unable to perform" with the group at Denmark's Metal Magic festival due to "unforeseen personal circumstances."

ROCK GODDESS's last release was a three-song EP, "It's More Than Rock And Roll", which arrived in May 2017.

ROCK GODDESS's career was cut short by financial and contractual problems, which forced them to disband shortly thereafter.

“I’m beyond thrilled to be joining...