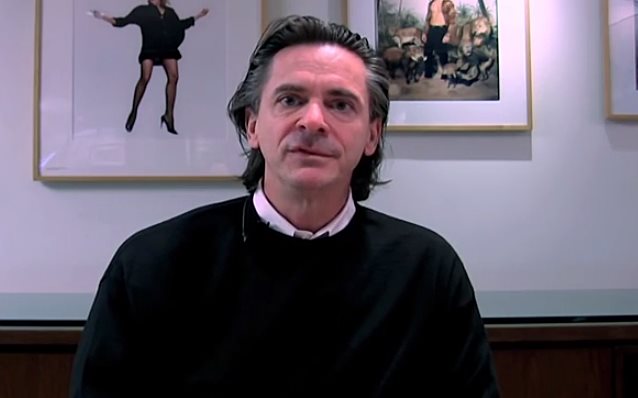 Joel Peresman (pictured),the CEO and President of the Rock And Roll Hall Of Fame Foundation, says that KISS guitarist/vocalist Paul Stanley has been "almost borderline racist" by allegedly stating in interviews that rap artists shouldn't be inducted into the Rock Hall because they don't play instruments.

Asked by Radio.com about KISS bassist/vocalist Gene Simmons' "surprisingly gracious" acceptance speech at this past April's induction ceremony, Joel said, "It was a lovely speech. It was actually kind of classy, as opposed to Paul's. That speech was the best advertisement for [pointing out that] what we did was right.

"[Paul has] been almost borderline racist, not in that speech, but in other interviews talking about how hip-hop artists shouldn't be inducted because they don't play instruments. It's like, 'What are you, kidding?'

"And he talks about the nominating committee, and how those guys don't buy records. Those guys buy records! They're fucking fans! Those guys are writers and critics and musicians. Those are the people who buy records and got into the business because they love music."

Peresman also spoke to Radio.com about the controversy surrounding the exclusion of later members of KISS and former NIRVANA drummer Chad Channing (who played on the band's classic debut album, "Bleach") from the Rock And Roll Hall Of Fame. He said: "Whether it's KISS or whether it's NIRVANA, or any other act, there's people on the nominating committee who nominate the act, and there's also people that we go to who are scholars and who know that genre of music. And when you go to them and you say, 'Why is this band being inducted and who should be inducted [from the band's lineups] and who are the artists who made this band what it was?', it was really just the three guys who were inducted for NIRVANA. And the same thing with KISS. It was the original four. Granted, they had other people play with their band, they've had big success with tours, but there's a reason they got inducted and the reason is, those four guys… This isn't an exact science. But you really have to go to the people you trust who have strong opinions, and are very deep and knowledgable on certain genres of music, whether it's NIRVANA or KISS or THE PAUL BUTTERFIELD BLUES BAND. You have to go with people who know the subject matter and you get those opinions and you make those decisions. It's not going to always please everybody all the time, but it's as 'right' as we can be."

Stanley last month called Hall Of Fame co-founder Jann Wenner a "spineless weasel" and said he and the rest of KISS were treated like "uninvited guests" during the band's Rock Hall induction ceremony.

"Our treatment at the Rock And Roll Hall Of Fame confirmed my worst suspicions," Stanley tweeted. "Wenner and the rest are spineless weasels." He went on to briefly explain that the band wasn't given passes or a schedule for the evening, but he didn't specify what kind of passes or schedules he was talking about.