ROCK ON THE RANGE Sells Out In Record Time

Tickets for the eleventh annual Rock On The Range have sold out in record time, just over one month after going on sale. This marks the fifth consecutive advance sellout for Rock On The Range, which will be held May 19-21 at MAPFRE Stadium in Columbus, Ohio.

Rock legends METALLICA, SOUNDGARDEN and KORN will each headline one night of America's largest and most acclaimed rock festival. LIVE, featuring the group's original lineup of Ed Kowalczyk (vocals, guitar),Chad Taylor (guitar, backing vocals),Patrick Dahlheimer (bass) and Chad Gracey (drums, percussion) has just been added to Rock On The Range, along with OF MICE & MEN.

The Rock On The Range music lineup includes:

The Rock On The Range Rolling Rock Comedy Tent will feature sets from nationally known comedians plus Columbus’s top comedy talent. The full comedy lineup will be announced in the coming weeks.

Rock On The Range celebrated its tenth year in 2016 — and after a decade of setting the standard for American rock festivals, the crown jewel of the World's Loudest Month showed no signs of slowing down, with "Rangers" from around the globe descending on MAPFRE Stadium. Last year, the festival received awards of recognition from both Columbus Mayor Andrew J. Ginther and the City Council, as well as a resolution from the Franklin County Board of Commissioners acknowledging more than $140 million in economic impact that the festival has contributed to the city over its ten-year existence.

Rock On The Range is produced by Danny Wimmer Presents, AEG Live and MAPFRE Stadium. 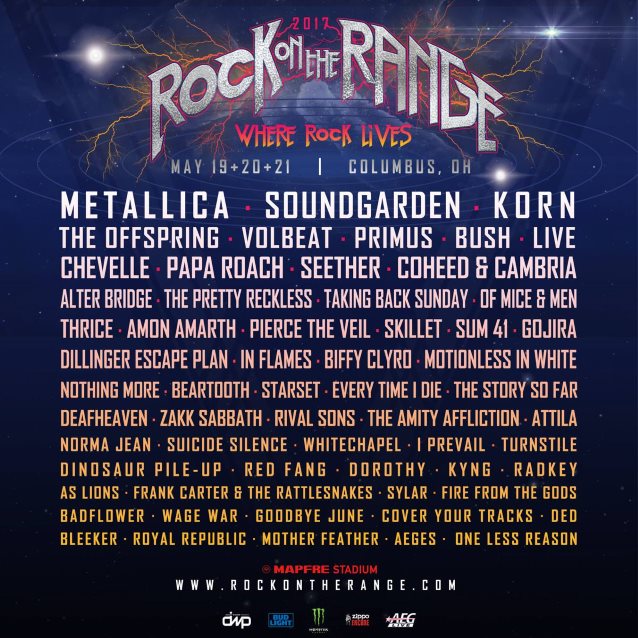