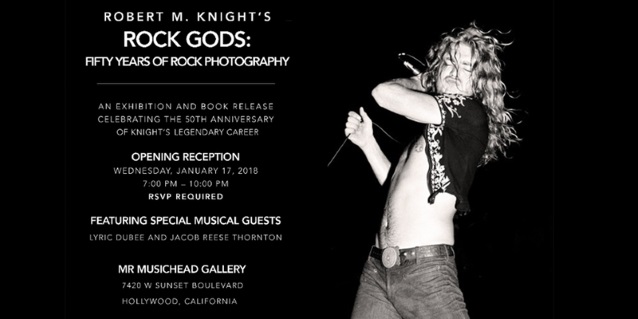 His ability to closely connect with and generate trust among the numerous artists he's photographed has led to a deeper, more intimate documentation of significant pop cultural moments.

This private event will take place on January 17 from 7 p.m. to 10 p.m. at Mr Musichead Gallery in Hollywood, California on Sunset Blvd.

Knight's early career took off in the late '60s when he photographed a young Jimi Hendrix in San Francisco, capturing his primal performance and adrenaline-driven solos. These images immortalized Hendrix and propelled Knight on a lifelong rock 'n' roll pilgrimage. Additionally, Knight took the first photographs of LED ZEPPELIN arriving in Hawaii on the tarmac, exiting their Pan Am flight, and the first and only photos of LED ZEPPELIN's debut at Los Angeles's Whisky nightclub.

Due on Janaury 16 "Rock Gods: Fifty Years Of Rock Photography" is the rich visual universe of Knight's work, replete with visions of guitar gods, monumental performances, and earth-shattering solos that chronicle the greatest moments in the evolution of rock music and culture. His remarkable photographs define generations of rock stars from THE ROLLING STONES and LED ZEPPELIN to RUN-DMC and GREEN DAY. Knight captures the grueling riffs of Jimmy Page, the flamboyant solos of Elton John, Slash's steel resolve, and Eric Clapton's soulful blues. His photography fashions a unique perspective on the world of rock stars, creating some of the most compelling and evocative portraits of popular musicians witnessed to date.