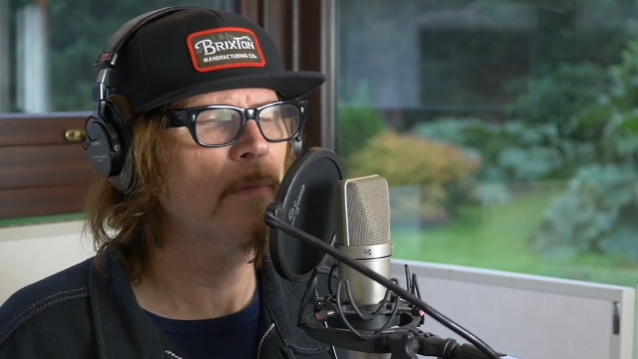 Brent Smith (SHINEDOWN),Tad Doyle (TAD),LAMB OF GOD guitarist Mark Morton and SLASH FEATURING MYLES KENNEDY AND THE CONSPIRATORS bassist/vocalist Todd Kerns are among the musicians who have reacted to the passing of Mark Lanegan. The former SCREAMING TREES frontman and erstwhile member of QUEENS OF THE STONE AGE died earlier today (Tuesday, February 22) at the age of 57.

"Our beloved friend Mark Lanegan passed away this morning at his home in Killarney, Ireland," his publicist said in a statement. "A beloved singer, songwriter, author and musician, he was 57 and is survived by his wife Shelley. No other information is available at this time. The family asks everyone to respect their privacy at this time."

Born November 25, 1964 in Ellensburg, Washington, Lanegan began his music career in the 1980s. In 1985, he became the vocalist for grunge group SCREAMING TREES; the group broke up in 2000. Lanegan would start a low-key solo career, but in 2004 Lanegan released his big breakthrough album "Bubblegum". In addition to leading the THE GUTTER TWINS, Lanegan was also involved in other musical projects, including hard rock band QUEENS OF THE STONE AGE, long-term collaborations with Isobel Campbell; and undertaken some surprisingly eclectic collaborations, such as co-writing and providing vocals for "Black River" by the electronic outfit BOMB THE BASS. He also lent his vocal talent to the highly regarded album "Above" by supergroup MAD SEASON and penned the theme song for Anthony Bourdain's award-winning TV show "Anthony Bourdain: Parts Unknown" with QOTSA frontman Josh Homme.

Last December, Lanegan released a memoir titled "Devil In A Coma" via U.K. publisher White Rabbit. The book detailed a "terrifying account" of his battle with COVID-19 which left him "slipping in and out of a coma."

I am so profoundly grateful to have had the chance to make music & become friends with Mark Lanegan. Few artists ever achieve the level of honesty & authenticity that he did.
He was absolutely brilliant.
Godspeed my friend. 🖤

My heartfelt condolences to the surviving family and fans of the immense talent that was Mark Lanegan. 🖤🖤☯️♾

Rest In Peace, old friend. Truly. More and more the best are no longer with us. @marklaneganpic.twitter.com/KPyPC17xad

So very sad to hear of the passing of Mark Lanegan. #marklanegan#ripmarklanegan@marklaneganpic.twitter.com/Mhcatyiyug

Hearing about Mark Lanegan passing away has properly stopped me in my tracks. I’m absolutely gutted. Met him on a couple of occasions and I was nervous because I loved him so much. He was a perfect gentleman, really kind. One of THE great singers of the last 30 years. So sad 💔

Mark Lanegan was a lovely man. He led a wild life that some of us could only dream of. He leaves us with fantastic words and music! Thank god that through all of that he will live forever. RIP Mark. Sleep well. Love Hooky. X pic.twitter.com/Xnx76y68YC

Oh no. Terrible news that Mark Lanegan has left us. Safe travels man – you’ll be missed 💔

I love you. Rest In Peace Mark Lanegan, my brother. No words. Heartbroken. pic.twitter.com/nQblLQNjnA

Terribly saddened to hear the news of the passing of Mark Lanegan. A very gifted artist blessed with honey dipped tones, gone far too soon.