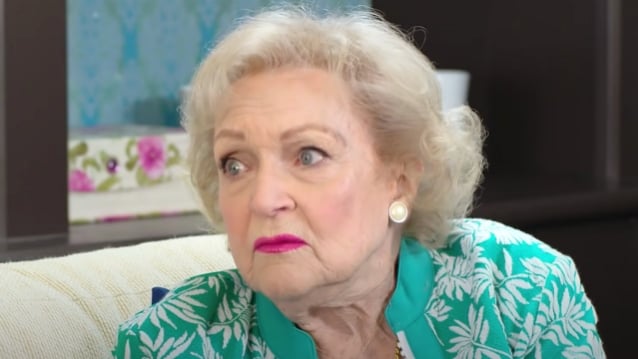 DISTURBED members David Draiman and John Moyer, THE OFFSPRING guitarist Kevin "Noodles" Wasserman and ANTHRAX bassist Frank Bello are among the rockers who have reacted on social media to the passing of Betty White. The beloved "Golden Girls" actress, comedian and American icon died peacefully in her sleep at her home early Friday morning (December 31) at the age of 99. She was just weeks away from celebrating her 100th birthday on January 17.

"Even though Betty was about to be 100, I thought she would live forever," her agent and close friend Jeff Witjas said in a statement. "I will miss her terribly and so will the animal world that she loved so much. I don't think Betty ever feared passing because she always wanted to be with her most beloved husband Allen Ludden. She believed she would be with him again."

White was scheduled to celebrate her birthday with a once-in-a-lifetime movie event, "Betty White: 100 Years Young - A Birthday Celebration". The producers behind the movie said it will be released as planned on White's birthday on January 17.

"Our hearts mourn today with the passing of Betty White," producers Steve Boettcher and Mike Trinklein said in a statement to ET. "During the many years we worked with her, we developed a great love and admiration for Betty as a person, and as an accomplished entertainer. We are thankful for the many decades of delight she brought to everyone. Betty always said she was the 'luckiest broad on two feet' to have had a career as long as she did. And honestly, we were the lucky ones to have had her for so long."

"We will go forward with our plans to show the film on January 17 in hopes our film will provide a way for all who loved her to celebrate her life — experience what made her such a national treasure."

The film will play in almost 900 movie theaters nationwide on Monday, January 17 at 1:00 p.m. and 7:00 p.m. (all times local). Tickets can be purchased online at www.FathomEvents.com or at participating theater box offices.

Damn. 2021 ending with the passing of the last living Golden Girl is an ominous sign. Rest east Betty White. Hope you and the girls share a cheesecake tonight.

No one lives forever but some of us should. Everyone’s favorite golden girl will always stay golden in our hearts. https://t.co/aIu6BGNAH5

What a bad ass she was 😢 #RIPBettyWhitepic.twitter.com/OVmErqOWZd

On behalf of all the animals to whom she loaned her voice, you will be missed. #rip#BettyWhitepic.twitter.com/Z4K3BzToBy

RIP Queen Betty White. You were the greatest. #BettyWhitepic.twitter.com/yI6or3eXoF