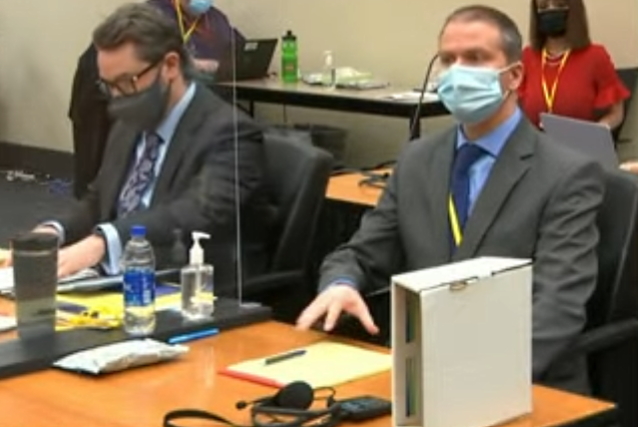 Todd La Torre (QUEENSRŸCHE),Vernon Reid (LIVING COLOUR),Mark Morton (LAMB OF GOD),Robb Flynn (MACHINE HEAD),Zach Myers (SHINEDOWN),Piggy D. (ROB ZOMBIE),and Ice-T (BODY COUNT) are among the musicians who have reacted on social media to the news that the jury has found former police officer Derek Chauvin guilty on all counts in the murder of George Floyd last May.

After hours of jury deliberations, the 45-year-old was found guilty of second- and third-degree murder and second-degree manslaughter.

On May 25, 2020, Floyd, a 46-year-old black man, was killed in an incident caught on camera. Chauvin kneeled on his neck for nearly ten minutes while Floyd was handcuffed after police responded to a report that Floyd used a counterfeit $20 bill. Chauvin's attorneys argued that he acted on his training from the Minneapolis Police Department in the use of a "Maximal Restraint Technique" and did so out of concern that Floyd might harm himself or the officers struggling to arrest him. The attorney also cited the autopsy conducted on Floyd that found fentanyl and methamphetamine in his system, a combination of drugs the attorney said is known as a speedball.

The jury had deliberated for about 10 hours over two days, following closing arguments.

Floyd's death sparked protests across cities in the U.S. and around the world.

This is a developing story. Please refresh here for updates.

That moment when you realize.... https://t.co/sbUrMwDU2T

Justice for Black America is justice for all America 🙏🏻

You fucking batshit crazy lunatic. . . I don’t think that was what he signed up for

I see that ROT IN HELL is trending. One down. ✊✊🏼✊🏽✊🏾✊🏿 #GeorgeFloyd#DefundThePolice

Regardless of your opinion on the Chauvin trial verdict, he at no point was a “good” cop. He had something like 13 complaints filed against him. He’s not the guy you want to throw your support behind.

#verdict
Shot this almost a year ago during NYC protests. Today is a small step in the right direction. 👏🏼 #JusticeForGeorgeFloyd#DerekChauvinVerdict#DerekChauvinTrial#GUILTYpic.twitter.com/YDI6dW6qln

G U I L T Y#JusticeForGeorgeFloyd

I find it fitting that an alpha-male COSPLAYER like Ted Nugent @TedNugent, who has always said he's drug free, announces he has Covid on 4/20, after a year of calling it a hoax, and on the day Derek Chauvin is found guilty of murder. https://t.co/Xk0CW9lmgi

Homey is gonna have a wonderful welcome to prison.
The inmates are drawing straws for who's first!
He wont be finding his ' happy place' unless he loves his asshole THAT much.

Holding this guy accountable is a decent first step but a harsh sentence will feel more like justice.