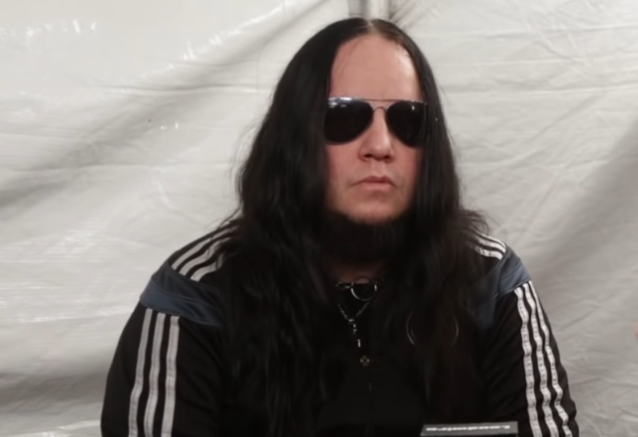 Members of ANTHRAX, FEAR FACTORY, KREATOR, ALL THAT REMAINS and TRIVIUM are among the musicians who have reacted on social media to the passing of former SLIPKNOT drummer Joey Jordison.

The news of his passing was broken in a statement from his family.

The statement reads: "We are heartbroken to share the news that Joey Jordison, prolific drummer, musician and artist passed away peacefully in his sleep on July 26th, 2021. He was 46.

"Joey's death has left us with empty hearts and feelings of indescribable sorrow.

"To those that knew Joey, understood his quick wit, his gentle personality, giant heart and his love for all things family and music.

"The family of Joey have asked that friends, fans and media understandably respect our need for privacy and peace at this incredibly difficult time.

"The family will hold a private funeral service and asks the media and public to respect their wishes."

Three years ago, Joey revealed that he was working on his first-ever book.

I will miss you my brother.🖤🖤🖤 pic.twitter.com/MwTIWfMZCe

This is tragic news. BVB’s first UK tour was a slot opening for Murderdolls and while I never had the chance to talk privately with Joey I was always impressed by his abilities and dedication to his craft. An iconic performer and artist. RIP. https://t.co/kyDdeqolsr

I don’t have words, to call him an inspiration would be an understatement. Countless hours studying every move behind the kit . I owe so much to Joey Jordison and could never imagine being where I am today without his influence. RIP pic.twitter.com/BAnLHW9Re2

Ah no…fuck. Joey was a gem. This really sucks. https://t.co/9grev2k0pQ

I cannot believe this news today, Rest In Peace #1 @slipknot 😢

Absolutely gutted to hear about the passing of Joey Jordison. I was lucky to have gotten to know him through the years sharing stages and partying around the world. He was an incredible talent and an amazing person. Will miss you my brother. RIP #1

Another devastating loss to the Metal community. Rest In Peace Joey. pic.twitter.com/NOBiHbHMWn

This is awful news. RIP. https://t.co/jaajOizKOK

Dude was an incredible drummer and song writer and was always super gracious to us anytime we toured with the band. #RIPhttps://t.co/tFuQS1Uw4y

46 is way to young and it feels like we missed out on a whole lot of great music from Joey.

Rest In Peace Joey Jordison. You changed the game with Slipknot. Brought the blast beat to the mainstream! Gave kids a groove like no other. Perseverance would’ve never happened had it not been for Joey & the Slipknot camp. Condolences to his family, friends & fans. Gone too soon

We may have had our differences. I tried to reach out recently to no avail. I hope you can rest peacefully. Thanks for...

Absolutely shocked and gutted to hear of the passing of Joey Jordison. In addition to being an incredible drummer, he...

Rest In Peace Joey Jordinson. Such a talented songwriter, amazing drummer, great guitar player, and funny human being. Our lives intertwined so many times man… This hurts. Way too young… 🖤🖤🖤 pic.twitter.com/7Wcz123wTT

Respect to the guy that took the blast beat to the masses! Friendly guy too. Damn shame this… Rest in Power! 🔥 #joeyjordisonpic.twitter.com/VTUFCYAZ6G

I love what Joey Jordison accomplished with Slipknot. They were the bridge from rock into professional wrestling. From what I hear, Joey had an illness that made him unable to play the drums. (Our bodies are only good for a time). Rest in peace… https://t.co/HWTtJ4FhfG

Deeply saddened to hear about the passing of @thejoeyjordison. He was an unbelievable musician and someone who was always so kind to me when I was a kid. I often think back and remember all the fun that was had on Ozzfest with @slipknot. I’d like to send my deepest condolences to his family and loved ones. Rest peacefully friend.