To listen to the program live via the Internet, go to this location. The program will also air in syndicated markets around the country the following weekend. Go to FullMetalJackieRadio.com for more information.

This year's Rockstar Energy Drink Mayhem Festival trek will be headlined by SLAYER and MARILYN MANSON, with a yet-to-be-announced "special guest" (strongly rumored to be KILLSWITCH ENGAGE, who are unable to announce their participation due to their involvement with the Music As A Weapon IV tour this spring) also making an appearance on the same stage (along with Welsh metallers BULLET FOR MY VALENTINE). The Jägermeister stage will feature TRIVIUM, ALL THAT REMAINS, GOD FORBID and the Jägermeister Battle of the Bands winner; the Hot Topic stage will feature extreme metal bands CANNIBAL CORPSE, JOB FOR A COWBOY, BEHEMOTH, THE BLACK DAHLIA MURDER and WHITECHAPEL. The World's Greatest Freestyle Motocross team METAL MULISHA will also be revving up the crowd with their unique style of death-defying motorcycle stunts on all dates.

The festival billing is as follows:

TRIVIUM
ALL THAT REMAINS
GOD FORBID

A short video message from Kerry King and Tom Araya of SLAYER officially announcing the band's participation in this year's Rockstar Energy Drink Mayhem Festival tour can be viewed below.

Manson is currently in the studio working on his forthcoming album scheduled for release in May on Interscope Records. This highly anticipated record reunites Manson and Twiggy Ramirez for their first collaboration since "Holy Wood (In the Shadow of the Valley of Death)" in 2000.

Summer 2009 will also see a brand new album from the mighty SLAYER, who have already recorded three new songs and are slated to return to the studio in February to finish. Late last fall, SLAYER made one of the new tracks, "Psychopathy Red", available as a free online stream to fans, and to date, the song has been posted online at more than one million sites.

"We co-headlined with MANSON once before, a couple of years ago," said SLAYER's Kerry King, "so we all know what we're getting into. Manson and I probably drank a little too much absinthe on that tour, but we had a really good time hanging out and playing good music — we're looking forward to doing the same this summer on Mayhem."

The Rockstar Energy Drink Mayhem Festival is the brainchild of Kevin Lyman, John Reese and CAA's Darryl Eaton, the creative team behind some of the industry's most successful road jaunts, including the long-running Vans Warped Tour and the worldwide Rockstar Taste of Chaos Tour. 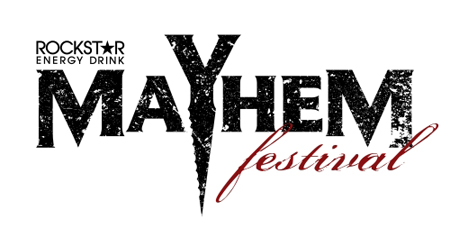